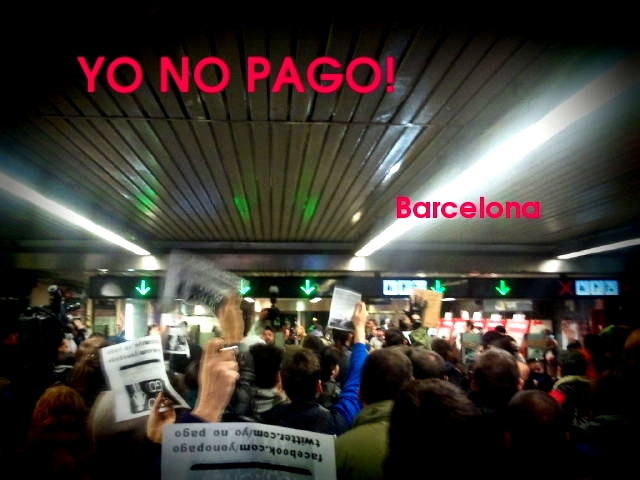 I’m going to make a report, explaining my personal view of some of the last protests in Spain, wich I think could be really interesting in many other places.

This movement started with a massive jumping inside the metro (underground,subway I never know how to call it in english), it was a success and yesterday the did it again.
Yesterday in Madrid the metro station was sorrounded by a lot of police and 5 persons were arrested, the protesters made also an improvised demonstration.
In Barcelona was so nice, nobody did nothing to stop it, the doors were open and blocked for hours and workers or police didn’t care. Everybody could enter for free and some random people also joined the demonstration inside the midtown big station.
You’ll find photos and videos here: https://twitter.com/#!/search/yonopago
These ones are great: http://yfrog.com/h65vvbrj
http://www.youtube.com/watch?v=PltYATuelmg
And today I was surprised when reading about a new parallel movement: “Yo no paro”, in english: “I don’t stop”, literal translation makes it not understandable, I would call it “I won’t stop them”. This is a calling made by the public transport workers from Madrid, they said that they’re not going to ask the people for the tickets nor stop them when jumping the doors in solidarity with the “yo no pago”.

But the best of all is that, based on some french similar movements, they’ll pay the fines of the people that travel without ticket, for 7€ a month, while the 10 travels ticket costs 9.25€.
Or maybe the best is that they’re getting funds of the government to pay the fines…

– Why I report this:
I didn’t participate (yet) on this protests, but I like how they’re being done.
I don’t know if on some other places this is happening as well, but this ideas can be used on every city that needs to do an active, original and smart protest.