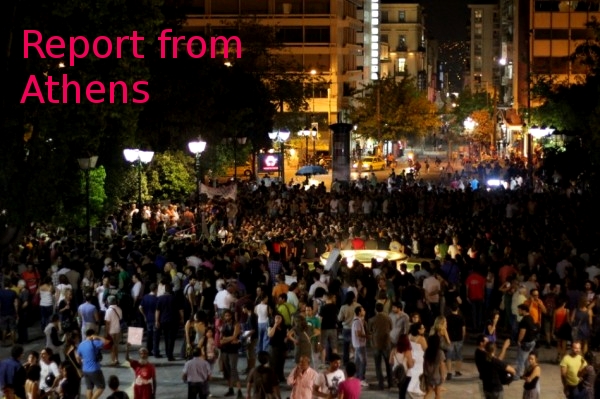 We regret we fail to successfully record and report to our European friends co-thinkers and activists (due to lack of resources) that in Greece almost everyday there is a variety of actions (demonstrations, activist groups, strikes) and that this in a way has become the Greek quotidian reality. Despite the winter cold and the economic struggle of each and every one in particular, these groups that are scattered throughout Greece and not only in Athens make it possible to speculate that by March or April if things stay as they are, there might big massive action (coordinated or not) of some kind.

During the winter, the meeting from all assemblies around Attiki (that is Athens and surroundings) was the biggest (as an organizing effort at least) thing since summer.
Coordination is not pursued by the participant assemblies at the moment due to many differences in goals and function although there are networking and information projects going on.

Things in Greece are moving now also in a different way.
There is a bunch of alternative economy projects, time banks, solidarity networks and other interesting stuff being organized every day in all big cities…This has “silenced” us in our “international” presence but you have to take into account that everybody’s life is becoming more difficult each day (economically speaking) so a lot of people try to find an individual solution because this has become in a way an urgent matter… The multimedia team (some 5,6 people left now) keeps posting stuff in our blog realdemocracygr.wordpress.com

The range and variety of these new projects and activities is enormous. Some are totally practical like helping the homeless or cooking for families others even consider constitutional reforms……
As for the occupations, there are artistic occupations and the project collective kitchen ELCHEF which goes well and is already known. There are also work collectivas operating. These are businesses that close down and the ex employees took over. There is also a major crisis in the mainstream media and the tv channel ALTER (employees unpaid fro months) now is broadcasting strike news. The big Eleytherotypia, a newspaper with a long history, is rumored to be taken over by the employees, at least to produce some strike issues…

Although things are pretty overwhelming several groups try to participate also in the European demonstration agenda, for example there are announced demonstrations in Salonica and Athens for the 11 February worldwide Anti-ACTA day.

The big masses stand frightened and chilled. but even this stasis is
quite unstable.They are afraid that what might come up next might be
even worse… Let us not forget that Greece has a long traumatic history
of foreign forces interfering in its affairs

It is my belief that when the tormented society will be at the breach
of exploding, at that exact time, the political elite will decide to
go to elections in order to gain time by adding some “democratic” cold
water to the boiling society. It will be nothing more that a
magician’s trick that will only postpone that which now seems
inevitable. A solution of some kind to the Greek tragedy. And there is
no tragedy without solution.