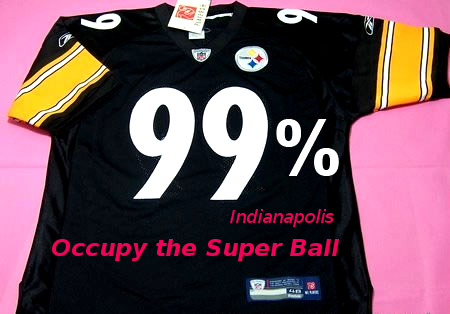 INDIANAPOLIS 2/3 – Indiana Occupiers, labor rank-and-file, organizers and activists will Occupy the Super Bowl in Indianapolis, IN Saturday and Sunday to protest the passage of union-busting Right to Work legislation.

The occupation is in solidarity with trade unions across Indiana, including members of the National Football League Players Association.

“This isn’t an attack on the Super Bowl or those who plan to attend,” says Greg Lambert from the Occupy Nomads and Occupy Indiana. “It’s an attempt to stop a war against working people being waged by Governor 1% Daniels, and the corporations and banks who buy and sell America’s politicians. This is a life-or-death struggle for the people of Indiana, we have to use this opportunity to tell our story while the country has its eyes on our state.”

On Saturday February 4th, Occupiers and their allies will gather at the south lawn of the Indiana Statehouse, at 5 p.m. to rally and march in support of Occupy Oakland.

A direct action event will take place at noon Super Bowl Sunday on the south lawn of the Indiana State House in Indianapolis, where Wednesday Governor Mitch Daniels signed into law HB 1001 attempting to dismantle union power and workplace democracy in Indiana.

More than 15,000 workers seized the State House Wednesday to try and stop Right to Work.

Sunday’s event will use the State House as a people’s stage to rebuild solidarity and resistance. The event will be non-violent and geared towards all audiences including fans attending the New England Patriots-New York Giants football game. Organizers especially invite out-of-state guests to Indiana to come and see the real effects of Right to Work on workers’ lives so they might go home to warn their brothers and sisters of its consequences.

“Right-to-Work takes away our livelihoods, and further degrades the rights of workers which have been under attack since the day they were signed into law,” says Tracy Lubbehusen from Occupy Indiana. “If the people of Indiana and their families were not desperate, we would not be taking to the streets in these numbers. What are you supposed to do when your elected officials refuse to put people first?”

“We wonder how Mitch Daniels and the other 1% politicians attending the Super Bowl will feel when they see Unions, Occupiers, and other people they claim to represent standing together against attacks on worker’s rights,” says Rachael Perrotta, a participant in Occupy Chicago. “Even the NFL Player’s Association has condemned Right to Work. Our movement is growing more cohesive, entering into a new phase of coordinated organizing with our allies in labor.”

Occupy Purdue, a participant in Sunday’s direct action, is in solidarity with the Occupy Wall St. movement, which empowers real people to create real change toward a more equitable society. Occupy Purdue invites all non-violent people to join.