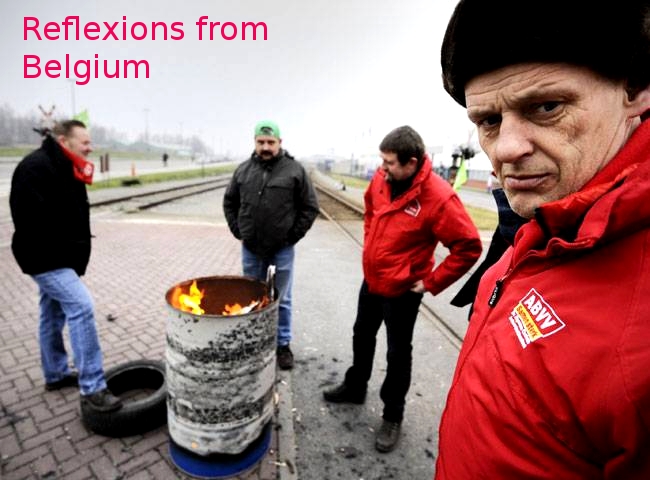 In Brussels there has been a general strike on January 30, but this general strike has been portrayed by the media and the politics as a general critic of unions and Right to Strike, and in my opinion, no matter if we are for or against, what is coming to us working with Unions all across the world is something like this :

Europe, USA and other countries in the coming month will try to do all they can to undermine the right to strike and the right to occupy the public space (this is already happening), they will try to assimilate striking has an attack against economic interests and market flows. At the same time we all seen the reactions of the different governments in Europe about the social spontaneous movements, the same occurring in USA where all Occupy initiatives are, sooner or later, raided and dismantled. Governments know that the best way to block our action is to block the Unions and the People, first of all putting workers against each others, employed vs unemployed, migrants vs natives, rich vs poor people, etc… The second part is to prove that the Unions doesn’t represent anymore the workers, even if it’s by public media manipulation of the masses.

While all this is happening, Europe is installing its ESM Treaty, in a few European countries, Germany, Portugal, Greece, Spain, France, a clear awareness of the danger of this treaty is starting to emerge, in Brussels, we launched the web www.interpellation-mes.be and www.constituante.be project, with the first one we use a system to send letters to all parliamentarians to question them about the ESM treaty. And with the second web we are asking for a popular consultation about the 2 last European treaties.

What has emerged from these two actions is the urgency to block the EMS, here a set of thought that I wanted to share with you :

– Recuperate our constitution without the imposed European austerity measures and anti-social restructuring,
– Make a Public Money Audit about the Debt, refuse to pay the illegitimate debt, the odious debt,
– Block the undemocratic proceadures of the ratings agencies,
– Nationalize public banks and recuperate our right to print money without borowing it from private banks to then pay interest and create debts.
– Make public reforms and make the financial system operate with a total transparency (opendata).

The CES (confederation of European unions) is calling for a day of action on the 29 of February.
Unions in Belgium are having a hard time to make people accept the closure of public transport, and other public services, and in my opinion we need to find a way to be able to produce actions without putting in our back the population. In Belgium, Unions are increasingly seen has unpopular old structures that didn’t defend workers and independents Rights, people have seen their income to remain the same and their right reduced. Unions are also big nontransparent structures that are not able to defend anymore the right of the workers, so the goal is to organize people’s assemblies accessible to the workers and be able to organize and control our “type” of strike without the usual unions structure and pyramidal organization system.

It will be very hard to reorganize the worker way to struggles and to make them realize the deep shit in that we really are, with the ESM, the austerity measures, without speaking about the fact that if the ESM goes full swing, we need to be ready to assume and therefore change our priorities if/when we lost our sovereignty has a country and therefore if/when we are not living in an open democracy.