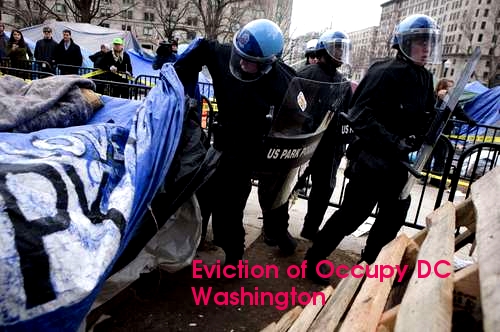 At around 5:40 am, the peaceful demonstrators of Occupy D.C. were greeted by helmeted swarms of National Park Service police, dressed in full riot gear–despite the very apparent lack of any riot–some on horseback, others wearing unnecessary hazmat suits. Members of the U.S. Park Police immediately began erecting metal barricades around the perimeter and cordoning off sections of McPherson Square.

A member of the Park Police announced that they would commence inspecting the occupation for compliance with park regulations.

Despite many Occupy DC members’ compliance with the Park Service’s regulations, the uniformed officers of the Park Police seized and ransacked demonstrators’ private property. Park Police have exceeded the scope of the enforcement of camping regulations 36 C.F.R. §. 7.96(g)(5)(v)(i), seizing empty tents and tents with non-camping related materials. Over the course of the day, what was initially described as a compliance inspection revealed itself to be a slow-motion eviction of those fighting for the 99%.

The Park Police maintain that members of Occupy DC have sixty days to obtain property seized during this slow-motion eviction.

As Occupy DC said at the Jan 21 congressional hearing in which 1%er Darrell Issa (R-CA) first called for our eviction:

Citizens of a free country should not have to ask for permission to occupy public spaces. Our occupation of McPherson Square is an expression of our right to free speech and peaceful assembly. We are maintaining a site of protest — a physical presence that gives visibility and voice to our dissent. We are creating a space in which free speech flourishes — not only the speech of occupiers, but that of the general public, the empowered and the disenfranchised alike.

It is a sad day in American history when the small act of occupying public space and calling attention to problems in society warrants a repressive response from the federal government, while institutionalized bribery, corruption and money laundering continue to reign on K Street.