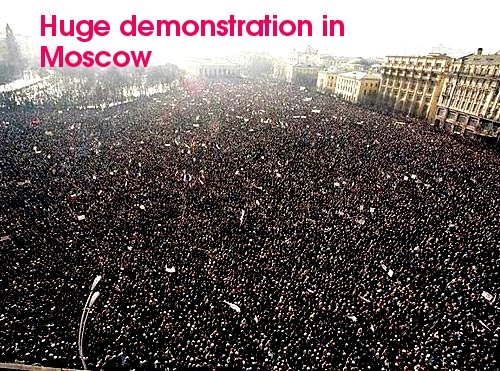 Up to 120,000 people demonstrated in Moscow yesterday, braving temperatures of -18C to demand fair elections in a march against Vladimir Putin’s 12-year rule.
Protestors shouted “Russia without Putin” and a resolution adopted at the rally called on Russians not to vote for Mr. Putin. The rally also demanded a sweeping overhaul of Russia’s political system, the cancellation of the December parliamentary election and the removal of the chief election commissioner.

Note:
We want to declare officially https://www.facebook.com/pages/Occupy-Russia/261544677214312 – this page is not the official page of Occupy Russia movement. We don’t share xenophobic, racist, anti-Semitic views. Our position is: solidarity of all nations.