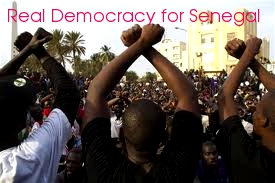 Listen to the AUDIO about what’s happening from journalist Pepe Naranjo in Dakar (in Spanish): http://www.masvoces.org/Senegal-aumentan-las
You can also watch a video recording that shows how the President of Senegal, Abdoulaye Wade, has acknowledged for some time that he is legally unable to run for a third term of office. http://puentehumano.blogspot.com/2012/02/irradia-01-02-2012-conexion-con-pepe.html
The issue is that he has changed opinion and the population sees its democracy completely in danger:
Following 40 years in which the African country has been a model democracy without political violence, Senegal’s president Abdoulaye Wade (85 years old and with 12 years in power) is running for a third term of office. This goes against various democratic mechanisms including the constitution that allows a maximum of two terms. A large part of the population is against his candidacy and against the drift toward totalitarianism in recent years. A broad social coalition has reacted indignantly since last Friday when a questionable Constitutional Tribunal accepted his candidacy and rejected those of singer Youssou N’Dour and other candidates. The president has ignored the social mobilizations and the diplomatic suggestions from the United States and France that he abandon his endeavor. On the contrary, he is reacting with police force.
The presidential elections will take place on 26 February and the most solid democracy of western Africa needs all the support possible in order to be preserved.
From Radio Geneto in Tenerife, the program ‘Irradia’ offers us a connection with Amadou, a Senegalese in the city of Louga and with the journalist Pepe Naranjo, of the Africa focused web portal GuinGuinBali, who reports from Dakar on the latest and most serious accounts from Senegal.
You can follow the unfolding situation at: http://guinguinbali.com?lang=en
Source: Email.