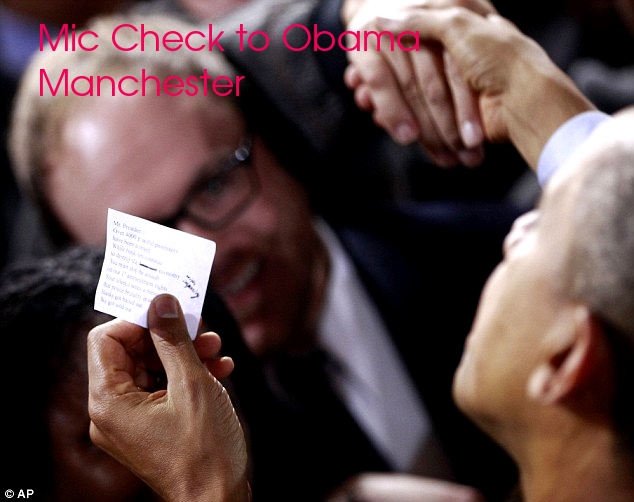 Today, Protesters from Occupations around the state widely known as Occupy NH mic checked President Barack Obama at his “American Jobs Act” speech in Manchester, NH. ONH protesters were spread out throughout the crowd. The plan was to Mic Check Obama before he got into his main speech. The Mic Check went off perfectly, silencing the crowd. Unfortunately, no more than 2 sentences into the Mic Check people in the crowd started chanting a cheer usually heard at a high school basketball game. Obama did recognize the Occupy Wall St Protesters and Occupations throughout the country and our dissatisfaction with the current economic climate in his speech at one point or another.

Mr. President, Over 4,000 peaceful protesters have been arrested. While Banksters continue to destroy the economy. You MUST stop the assault on our 1st amendment rights. Your silence sends a message that police brutality is acceptable.

We respectfully request that you publish our message in full.