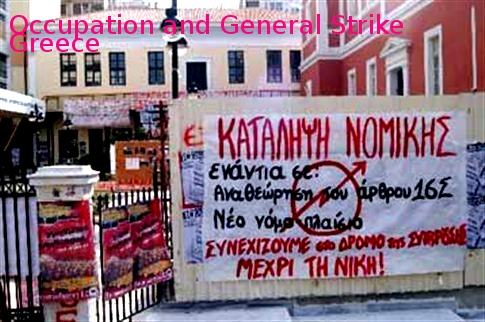 Building occupations spread ahead of the General Strike demonstration

The Town Hall of the suburb of Holargos in the city is now also under occupation, by the local open assembly.

In the northern city of Veria, people have occupied the local “peripheral union” (a governance body).

Statement by the Occupied Athens Law School, February 9: “In order to liberate ourselves from debt we must destroy the economy”

The political and financial spectacle has now lost its confidence. Its acts are entirely convulsive. The government of “emergency” that has taken over the maintenance of social cohesion is failing in conserving the labour, and at the same time the consumption power of the population. The new measures, with which the state aims to secure the survival of the greek nation in the international financial world, lead to a complete suspension of payments in the world of work. The lowering of the minimum wage, now also in paper, comes in harmony with the full suspension of every form of direct or social wage.

Every cost of our reproduction vanishes. The health structures, the educational spaces, the “welfare” benefits and anything making us productive in the dominant system are now a thing of the past. After squeezing everything out of us, they now throw us straight into hunger and impoverishment.

The securing of the abolition of any form of wage, on a legal level, takes place via the creation of a “special, closed off account”. In this way, the greek state ensures that the monetary stock will be used exclusively for the survival of capital, at the expense of our own lives, even. The weight of the debt (not of the state, but of that which is inextricably contained in the relationship of capital) is swinging over our heads, threatening to fall on them and to extinguish us.

The myth of the debt. The dominant patriotic discourse promotes the idea of the greek debt, placing it as a transnational matter. It creates the impression that some stateless loan sharks have targeted the greek state and our “good government” does anything it can to save us, or, on the other hand, that it aims to extinguish us, itself comprising part of the international monetary capital.

Against this false nationalist conception, the debt is a result of, and indistinguishable part of the political economy, a fact that the bosses know only too well. The economy is based upon the creation of shortages, upon the creation of new fields of scarcities (that is, the destructive creation, with negative, always, long-term consequences). The debt and guilt-laden will expand and will dominate society for as long as there exists property, the routine of consumption, exchange and money.

When we say that the crisis is structural and systemic we mean that the structures of the political economy have reached an end, that their very core has come under attack — that is, the process of value production. It is clear that for capital, we are spareable (see the sky-rocketing unemployment figures) and that at this point, the reproduction of labour force is merely an obstacle in the process of capital accumulation. The monetary-debt crisis, that is, the replacement of wages with loans, and the inability of issuing of loans, lead the system into a vicious circle of unsustainability. This happens, because it places under questioning the value of work itself, that is, the same relationship through which those from below would fit into the roles of the system.

Should we then head for socialism and “popular economies”? All kinds of union professionals and wannabe-popular leaders cultivate their own illusions and a political exit within the system and the current political economy. They might talk of the nationalisation of banks, they might take the form of the rejuvenation of rational liberalism. Oftentimes, they even take the form of recuperation and alternative “revolutionary spirit”. Other times, we hear about green development, ecological decentralisation, direct democracy and the fetishism of political forms.

While the market itself, and the state intervention fail to give any prospects whatsoever, political spectacle continues to promote all sorts of products such as popular economy and authority from state socialisms. The mythologies of the various dictatorships of the proletariat, survive at the same time when the masses of those excluded from production, from institutions, the unemployed, all fail to provide any reliable clientele for political parties and their syndicates. The reactionary political position of state capitalisms has been replaced by a void trade of ideology.

Social war knows no borders. Some, amidst the crisis, see a re-contextualisation/re-drawing of national enclosures. The national body and the various racists seem to see an opportunity to target migrants, to make attacks and pogroms and to promote the institutional racism of the greek state. For them, their resistance is painted in national colours; they struggle as greeks, not as enemies of exploitation and the social repression they face.

We consciously chose sides, believing that any presence of any national symbol or flag belongs to the camp of the enemy, and we are willing to fight it by all means possible. Because the nazis of the golden dawn, the autonomous nationalists and the other fascists promote a pure national community as a solution, the precautionary attacks against them and the solidarity to the migrants is a necessary condition for any radical attempt.

The only solution is social revolution. Against all the above, we propose social revolution, which we consider the only solution in order to have a life, not bare survival. This means, to rise up against any financial and political institution. It requires, through the route of revolt, to take measures such as the abolition of the state, of property and any sort of measurability, the family, the nation, exchange and social genders. In order for us to extend gratuitness and freedom across the entire social life.

This is what revolution means! Bringing to this direction any struggle centred on wage demands; any self-organised structure and assembly, especially at a conjuncture, as the present one, when the political-governmental form of the systemic crisis can lead to a social explosion.

Open assembly at the occupied Law School immediately after the demonstration