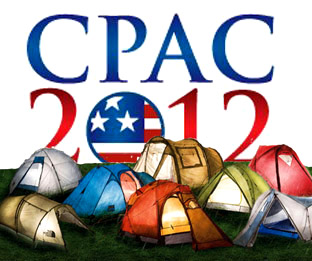 During Republican presidential candidate Mitt Romney’s much-anticipated speech at the Conservative Political Action Conference (CPAC), “Occupy” protestors conducted a silent protest that erupted into a chanting match between protestors and conservative conference attendees. In an overflow room next door to the main ballroom broadcasting Romney’s speech, about two dozen protestors stood in front of the monitors attempting to block the view, according to two conference attendees in the room. Two college students from New Jersey, Matt Bowe and Kevin Spiley, gave Hotsheet the play-by-play. “They weren’t tall enough to block the screen, but it was still annoying,” Spiley said. The crowd started to yell at the protestors, who covered their mouths with tape and wore shirts that read, “If money is speech, poverty is silence.” Bowe said people started to shout the protestors down by saying, “‘You smell, get a job’ — you know, the usual stuff.” Hotsheet witnessed the protestors being escorted through the maze of conference rooms, down an escalator, through a hotel bar and out the side doors of the sprawling hotel. By that time, the “Occupy” protestors had torn the tape off their mouths and loudly chanted, “We are the 99 percent.” The group of protesters were college students from different parts of the nation who said Romney’s policies would only benefit the nation’s elites. “Romney says ‘I’m not concerned about the very poor,’ and I’m here to say he should care, I’m one of them,” said Joe Gallant, a recent graduate of George Mason University. “I’m working two jobs and still can’t make it.” As the protesters were escorted out, conference participants shouted back, “We pay your rent,” and moved into the hotel lobby and perimeter hotel bars chanting, “Get a job.”

While leading figures in the conservative movement continued to meet inside, outside the hotel the atmosphere was more raucous, with several hundred people rallying at noon beneath a giant inflatable “fat cat.” They held signs, chanted, and set up a few tents at the bottom of the hotel’s winding driveway. But when protesters began marching up the driveway shortly after noon, several D.C. police officers impeded their path and instructed protesters — and members of the media — that they needed to move back. Police said the driveway was private property and that those still on it risked arrest. The protest began moving back down the driveway as CPAC attendees watched from the sidelines. Police continued to keep protesters and members of the media off the driveway but allowed the protest to spill off the sidewalk, blocking the street. It also drew a mix of Occupy protesters, union supporters and members of local groups. “We’re protesting CPAC’s propping up of policies that don’t force U.S. corporations to pay their fair tax share, and really promote obscene income inequality in this country,” said James Adams, a coordinator with Occupy DC. “The dreams of Americans who make up the 99 percent are being squashed by CPAC and their poster boy, Mitt Romney.”