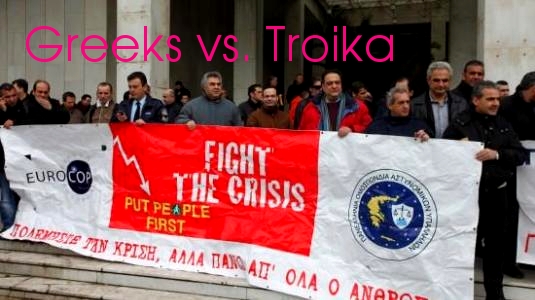 Greece is experiencing a genuine financial and social earthquake, especially after acceptance of the last cut imposed by the Troika. Yesterday one of the most important associations of the Greek police demanded the arrest of the troika for “extortion” and “elimination of democratic politics,” and during the evening there have been tremors in the government.

In a letter obtained by Reuters Friday, the Federation of Greek Police accused the officials of “…blackmail, covertly abolishing or eroding democracy and national sovereignty” and said one target of its warrants would be the IMF’s top official for Greece, Poul Thomsen.
The threat is largely symbolic since legal experts say a judge must first authorize such warrants, but it shows the depth of anger against foreign lenders who have demanded drastic wage and pension cuts in exchange for funds to keep Greece afloat. The letter was also addressed to the European Central Bank’s mission chief in Greece, Klaus Masuch, and the former European Commission chief inspector for Greece, Servaas Deroose.

“Since you are continuing this destructive policy, we warn you that you cannot make us fight against our brothers. We refuse to stand against our parents, our brothers, our children or any citizen who protests and demands a change of policy,” said the union, which represents more than two-thirds of Greek policemen.
“We warn you that as legal representatives of Greek policemen, we will issue arrest warrants for a series of legal violations … such as blackmail, covertly abolishing or eroding democracy and national sovereignty.”

However, within the executive, has been the right-wing party Popular Orthodox Concentration (LAOS) who has starred in the day. First, a minister and two vice ministers , all from the right-wing party, have resigned for disagreeing with the agreement on new austerity measures reached by the prime minister, Lukas Papadimos, with the troika.
It comes to the Transport Minister Makis Voridis, and vice ministers of Merchant Marine and Agriculture, from LAOS.

Already yesterday a Labour deputy resigned in protest against the measures and a member of the socialist PASOK delivered this morning his deputy act as contrary to the agreement with the troika.