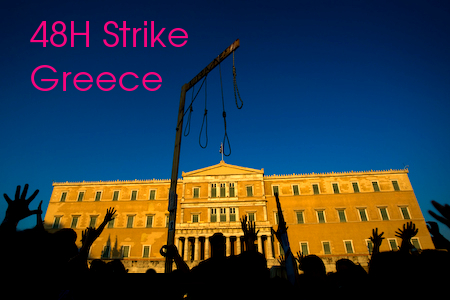 Today, February 12th (03.00 GMT+2), 67 years have been completed since the 1945 Treaty of Varkiza, where the Stalinist KKE (‘Communist Party of Greece’) betrayed armed struggle and thousands of fighters of the Civil War in exchange for its legality in the new regime. How much longer can the people take to the streets bare-handed against the totalitarian regime? Misery or revolution the dilemma lingering in air… an outspoken cry for freedom.
Yesterday afternoon around 5 at Syntagma square in Athens there was an ANTI- ACTA protest in the content of the worldwide mobilization.
The activists informed the people about ACTA and how it affects our Internet rights.
At the same time there was a protest in Salonica and in Patras. The participation was about 500 people in Athens and about a 1000 in Salonica but this was expected since in Greece right now there is a turmoil of demonstrations occupations and general mobilization because of the memorandum II which is going to be voted today Sunday 12/2 at the Greek parliament. Video
Yesterday morning there was also another big demonstration against the austerity measures.
More info
Greek people on the spot: @ypopto_mousi @mindthecam
Hashtags: #Syntagma #12fgr #Greece #rbnews

Report from today:
18.57 People inside the Law school are now withdrawing from the building after the consecutive police attacks.

18.49 Update from inside the Law school in Athens: consecutive police attacks on the building are pushed back by the people inside it. It now seems likely that the police will attempt to storm the university building.

18:29 Ermou street is packed with demonstrators who are clashing with police units, in their effort to return to the Square. Law School Occupiers calls for more people to gather there and march all together to Syntagma.

18:25 People are gathering in front of the Parliament again, while all around the center dispersed groups of demonstrators are clashing with dispersed units of riot police.

18:22 Clashes still going on around King George Hotel and on Fillelinon Street, a lot of molotov cocktails, while the Law School Occupation calls for people to go there.  At least demonstrator severely injured in Sytagma Sq.

18:00 Full scale clashes in front of the parliament. Police attacked dispersing the crowd, tear gased demonstrators moved on the lower part of Syntagma square while several hunderds are confronting the police throwing stones. The Law School occupiers were attacked by the police a part of their block moved towards Syntagma another part returned back in the School. Fires are burning in order to minimise the effects of the tear gas and barricades are erected around Syntagma Sq.

17:39 First tear gas in front of the Parliament

17:33 Small tension with the police in front of the Unknown Soldier Monument (Bottom of the House of Parliament), but people remain there

17.10 More than 10,000 people already gathered at Syntagma, with the square filling up very fast.

17.03 About 200 demonstrators are trapped inside the Law School, surrounded by heavy police forces.

16.31 Ilioupoli, Athens: About 100 people are at the pre-gathering. A small demo will follow in the streets of Ilioupoli and then the people will head to Syntagma.

16.27 About 1000 demonstrators are at Monastiraki square.

16.07 Pagrati, Athens: A march is going to start in about 15 minutes, heading toward Syntagma square.

16.04 Syntagma: A double cordon of police pigs in front of the monument of the unknown soldier.

16.03 Latest update from the occupied Law School: There is a need for reinforcements as police forces are all around the area. Access to the building is not as easy any more.

15.52 About 400 protesters at Syntagma. They just took over and closed off Amalias street.

15.39 People are gathering at the Law School. As a comrade reports on 98fm, a riot police squad is at the pedestrian street between Propylaea and the Law School.

13.59 Chania, Crete: The occupation of the Prefecture continues. Anarchists/antiautoritarians have made various counter-information actions in the citys’ neighborhoods.

Approx.13.00 There are reports of “preventive” detentions of people in struggle from inside their own houses. The Initiative a Ship For Gaza, has released a communique informing about the detention of one of its members.

12.18 A squad of riot police is lurking on Othonos street, close to the metro station of Syntagma.

10.30 A group of Metro employers along with some people in solidarity are trying to put pressure to the management of the Metro, in order to reopen the Syntagma station. The authorities have decided to also shut down the Panepistimio station, at Propylaea, after 14.00.