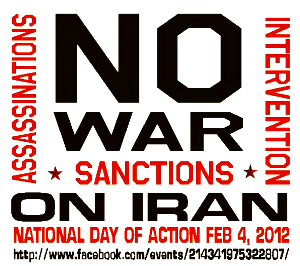 This document was consensuated in Madrid by the working group ‘International policies’.
We informed yesterday the general assembly in Madrid and we ask now to all different occupy, 15M, assemblies to support it.
To contact us and work together on how to implement the campaign against war
politicainternacional15m@gmail.com

We ask all different
No to war against Iran, sanctions and intervention
The campaign led by the United States to achieve a regime change is growing. The war of censorship and control of information intended to prepare the ground for the next invasion is gaining strength.
The European Union has announced a total embargo of Iranian oil. Together with economic sanctions imposed by the US and its allies, this is a campaign intended to inflict maximum suffering on the Iranian people in order to destabilize and destroy the country’s economy.
At the same time, covert actions within the country including assassinations and sabotage are intensifying. US military bases surround Iran with nuclear arms, carrier planes and Trident submarines.
The pretext for the aggression against another country in the strategic Persian Gulf region is that Iran is developing nuclear arms, an allegation that Iranian leaders have denied.
The hypocrisy of this accusation by the world’s greatest nuclear power and its allies, also in possession of nuclear arms (Israel, Great Britain and France), could not be more clear.
The US defense industry is looking to repeat history. The capitalist system itself needs and permanently feeds into war.

The US is the primary provider of arms to Israel, which possesses illegal nuclear weapons and has violated international laws and regulations by utilizing weapons with depleted uranium.
The US presently violates international treaties such as:
The Treaty on Prohibition of Anti Personnel Mines
The Convention on Biological Weapons
The Treaty on Anti-Ballistic Missiles
The Treaty of Nuclear Non Proliferation
The Commission on Chemical Weapons
Sixty years ago, the United States and Great Britain imposed a worldwide embargo to Iran’s petrol, by way of answer to the nationalisation of the country’s petrol based resources by the first democratically elected government in the history of Iran, the Mossadegh government.
The embargo weakened the government to the point that in 1953, the CIA was able to carry out a coup d’etat and put the Shah (king) once again on the throne. For the next twenty five years, the shah was an extremely brutal agent for the United States, causing the death of up to 100,000 iranians in the regime’s torture rooms, and reprivatising the country’s petroleum resources to US companies and banks.
For twenty years United States pressured the Security Council for a total blockade of Iraq. Thirteen years of sanctions killed over a million Iraqis weakening the country, paving the way for the 2003 invasion, an occupation that killed a million Iraqis.
Now, before the situation worsens, it’s time to take action to stop the war that has already begun against Iran.

No to pre-emptive wars, which only serve the interests of the 1% and death for the 99%
No to wars that benefit financial speculation by energy intermediaries to reconstruction multinationals, the arms business, the logistical support business, and that of mercenary companies
No to “humanitarian” wars
No to war in my name, or in anyone’s name
No to war!
We support the proposals of the joint statement being prepared by the Moscow and New York general assemblies:
Negotiations for the global elimination of all existing nuclear arsenals and a permanent and equitable world free of nuclear weapons.
Reduced transparency of conventional arms in all countries.
An end to the development of missiles and space weapons, and negotiation of a ban on space rockets.
The end of all programs on unmanned aircraft and any development of new lethal technologies.
Reallocation of military spending and capabilities of scientists to build a more secure and sustainable world for all people.
Decommissioning of military alliances of NATO and other blocks.
End the spread of nuclear technology worldwide and the closure of existing nuclear power plants.
And we launch a global campaign against permanent war and the war in Iran.