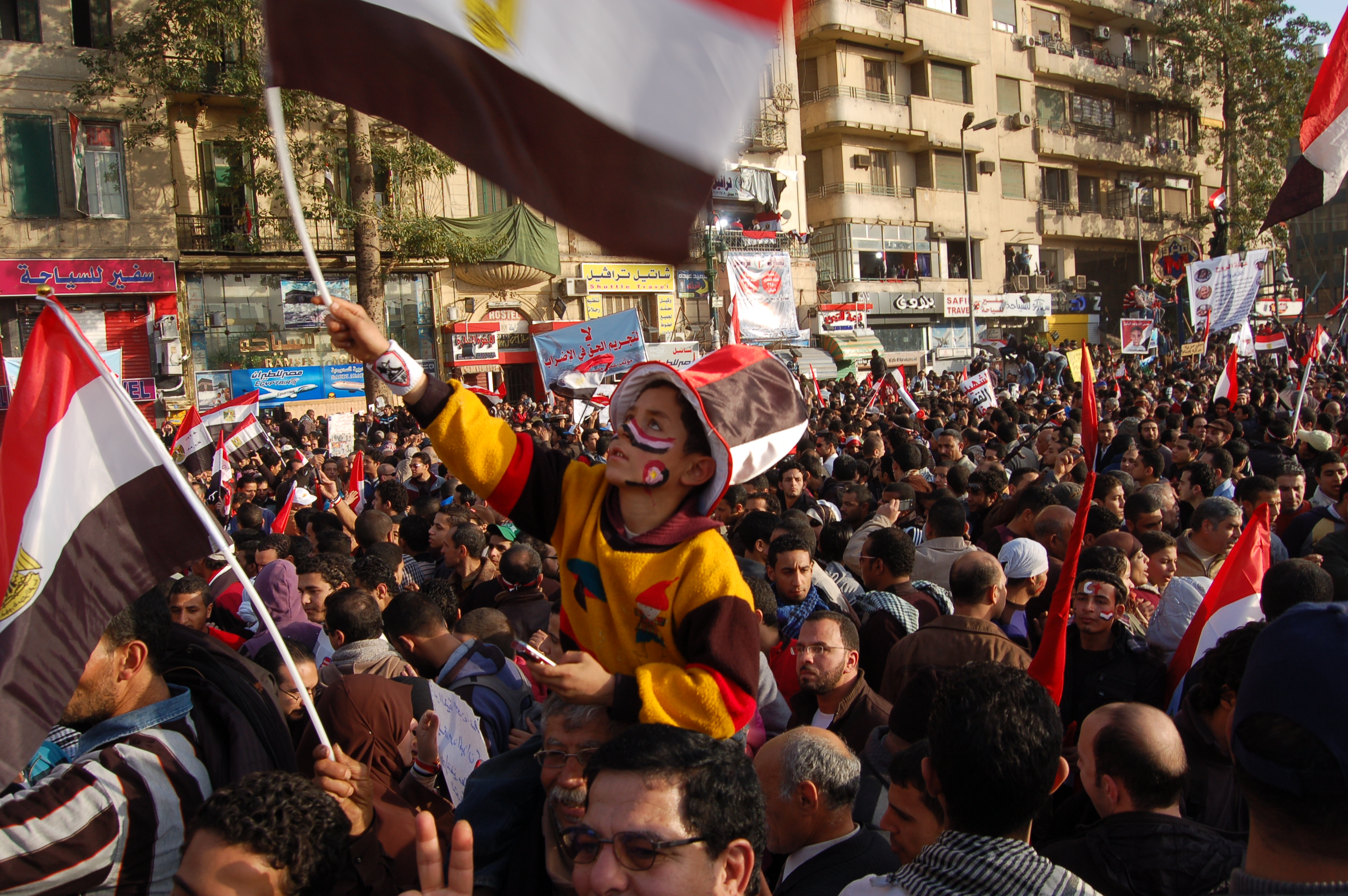 On the 25th of January millions of people took to the streets across Egypt to mark the anniversary of the revolution and protest against the current military rule. Tahrir square, the epicentre of the revyolution was filled again and re-occupied. People chanted “we will finish this revolution” and signs everywhere read “Hand over power, No SCAF” (Supreme Council of Armed Forces). The sheer number and diversity of people was astounding. There were old and young, Muslims and Christians, rich and poor, men and women. A member of the liberal party named Baa yelled to me over the noise “there are more people here than during the revolution.” It was part festival, part protest, with music concerts, impassioned speeches, public praying and at one point people cheered as a military manikin was hung by the neck over a traffic light. More and more people kept coming all day and the square was so full you couldn’t move. The protests went all night and tents were set up so the occupation could continue into the future.

It is clear that the revolution has changed many people’s lives and politicised a generation of young people. Everyone seems to have a story about those 18 days in Tahrir square last year, when people power brought down a dictator. It is referred to with a kind of nostalgia as a time when utopia was created; “we were all equal in Tahrir”, “it was the first time I felt free”, “everyone came together to fight for their rights”, “they were the happiest days of my life”. One year on the mood has changed, but political graffiti still covers the streets of Cairo with slogans like ‘power to the people’ and ‘expect resistance’. I spoke to an organiser for the Alliance of Revolutionary Forces of Egypt named Mohamed. He had thirteen sim cards and before the revolution was some sort of smooth salesman. Yet now he is using his charisma to fight the military, he said “the revolution changed everything, it opened my eyes.” The broader effect of the revolution on Egyptian society can be seen in individual people’s relationships. Mohamed said, “Me and my girlfriend were in Tahrir square together. So I know that if she doesn’t like things at home, she will make a revolution at home, with sit-ins and protests if I do anything wrong.” On Friday the 26th of January thousands returned to Tahrir square for the weekly prayers. Directly after the sermon someone yelled “down with the military”, the crowd repeated the chant and it instantly turned from a religious gathering into a protest. Other groups marched on Maspero, which is the state television building where 27 people were killed by military police during a demonstration in October last year. Activists targeted the state television because they see it as the ‘mouth piece’ for pro-military propaganda. The building was surrounded by barbed wire and army personal with machine guns. A sit-in began out the front and a media collective called kazbon (meaning liars) projected a film documenting military violence on the side of the building. Over the next few days it seems as if on every street corner there was some sort of protest going on. On the 3rd of February demnstrators stormed the Syrian embassy in Cairo and set it on fire to protest the regimes brutal repression of human rights. There was an occupation of Tahrir square, but the revolutionaries believed it was time to change strategies. Mustafa, a 23 year old Egyptian activist stated “we are trying to expand the movement out of Tahrir, because if we stay there we can be ignored and we don’t want that”.

As the days wore on divisions between different groups of protesters were becoming more apparent. On January the 31st, student and revolutionary organisations decided to march on the Parliament. Yet when they arrived the Muslim brotherhood (who won 47% of the vote in recent elections) had formed a human ring around the parliament. Previous allies became enemies and a tense standoff began. Clashes broke out between the two groups and I saw a young man getting carried out with blood streaming down his face. It was clear that the Muslim Brotherhood were working with the police, because they were carrying their injured people threw the police lines. One protester said “tonight the Muslim Brotherhood has become part of the system and against the revolution.”

On the 1st of February 73 people were killed and hundreds injured in a football match at Port Said in Central Egypt. On the surface it appears to be a case of mindless football hooliganism gone very wrong. Yet many are convinced that the attack was organised by pro-Mubarak force or the military. This is because the security forces did nothing to stop the violence, the gates to the stadium were locked shut so no one could leave and there was none of the usual weapons search procedures. The fans who were attacked were ‘Ultras’ from the Ahly team, who supported the revolution and have played a key role in street battles with the police. The football massacre has been interpreted as pay back and an attempt to destabilise the country. A spokesperson from the Ahly football club stated “we have no doubt that this attack was arranged”. The next day there was a sombre mood on the streets of Cairo with people in a state of shock. The tension continued to build as fans and revolutionaries prepared for a march on the interior ministry. By night fall thousands had gathered in Tahrir square chanting “the military is responsible for this” and “execute the field marshal”. All of a sudden people started running down Mohammed Mahmoud St. until they reached the ‘Cairo wall’. This was a three meter height barrier constructed by the army during the last clashes in November to protect government buildings. Protesters helped each other up onto the wall and started breaking it down piece by piece. This was no easy task because the wall was constructed with massive square stones, weighing around a ton each. People used metal barriers, ropes and anything they could to bring the wall down. When the first part of it began to crumble down the crowd started cheering, with people hugging each other and dancing on the wall. Protestors then ran through the newly created hole in the wall and head long into the police lines.

The fighting continued for days and walking down Mohammed Mahmoud St. was like entering a war zone. Many people were coughing and stumbling down the road to get away from the tear gas, while others were putting on gas masks and walking determinedly towards the police lines. Fires were burning on the streets and the sound of ambulance sirens was deafening. It was like the world became a sequence of chaotic moments. Motor bikes would constantly burst through the crowd transporting injured people away from the front lines. Someone carrying a police shield and sword walked pass me smiling. There were temporary medical centres being set up by the side of the road. The fighting continued for hours, becoming like a game of cat and mouse. The police would get forced back a few hundred meters by protesters throwing stones, bricks and anything they could get their hands on. Then the police would attack the protesters with tear gas and rubber bullets. In these moments mass panic takes over; people screamed and ran in a stampeded to get away. You can’t breathe and your eyes sting so badly from the gases that seeing becomes difficult. Medics would spray people’s faces with myox, a white chemical the leaves a war paint like mark on you face and does something to alleviate the pain. An Imam walked out in between the protestors throwing stones and police with guns and placed his white head cap on stick calling for a truce. Yet the truces never seemed to last for more than a few hours. Chants of Horreyah ‘freedom’ filled the air and the fighting started up again. I saw two children with gas masks rescuing cat and carrying it to safety. The walls all around were covered in political graffiti, with slogans that read “our revolution will last” and “all cops are bastards”. The street battles started on Thursday night and continued through till Monday, during those days 7 protesters died and over one thousand were injured. Most suffering from complications related to the ‘toxic’ tear gas. For the police had used so much tear gas that it wafted through much downtown Cairo, with street vendors coughing and covering their faces with scarfs. On the 10th of February a march was planned to the ministry of defence, because as one protester said “we must go and confront the beast head on.” The week before another demonstration had gone to the same place and it was violently attacked by paid thugs with homemade grenades. The march weaved its way through the streets of Cairo for hours, growing in numbers all the time. As the demonstration got closer to the military complex, paid thugs started to appear on the rooftops of buildings throwing stones. Yet the protesters continued on until they reached the ministry of defence. Where thousands of people started a sit-in for several hours chanting “hand over power now!”

The campaign against military rule continues to grow and evolve. Over the last 18 days there have been many different forms of political action; from mass rallies to occupations and street battles. On February the 11th, the anniversary of President Hosni Mubarak’s resignation activists started a new civil disobedience and strike campaign. Labour unions, student groups and political parties are supporting the action, which is planned to last until the military resign. The Supreme Council of the Armed Forces has labeled the campaign the work of ‘foreign conspirators’, who want to destabilize Egypt. The first day of the campaign saw students and specific parts of the workforce taking part in the strike action. Yet time will tell whether this campaign can grow into a mass movement. Tarek al-Khouly, spokesperson for the April 6 Youth Movement Democratic Front said that “the strike’s participation rates among university and school students prove that the current generation is capable of proceeding on the revolution’s course”.