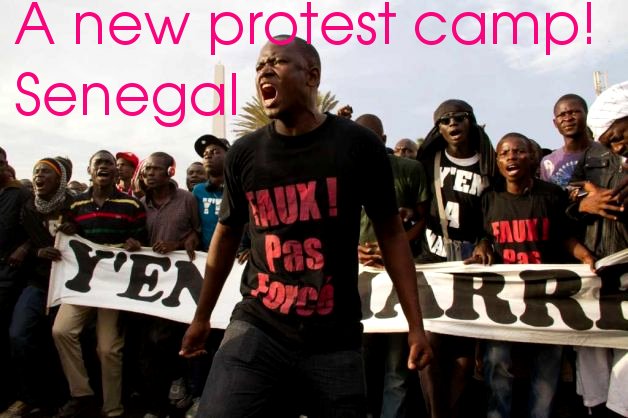 Update:
Y’en a marre: Dear friends, for cause of ban from the prefecture, the beginning of the program “Fanane” to the Obelisk originally scheduled Tuesday was postponed. There sick takes note of this last minute decision of the authority who participates little to preserve the peaceful option. To such actions, we call for the mobilization of all citizens to hold imminently this great mobilization. The fight continues!
facebook.com/pages/Y-en-a-marre

Faced with the refusal of Abdoulaye Wade to abandon his candidacy, youth Movement “Y’en a marre” go to the next level. Fadel Barro and Co. will now camp in the place of the Obelisk and call the Senegalese to do the same from Today. This is the new action plan they unveiled yesterday in the place of the Obelisk. We call on all Senegalese to join us here from Tuesday, with their mattress or sleeping bag. With the youth of M23, we will now spend the night. The fight will continue in a peaceful manner until the departure of Wade , says the coordinator of “Y’en a marre” , Fadel Barro to hundreds of young people gathered in Colobane. To those who can not join them, the “Y’en a marist” request to participate in another way: They can send us mattresses, tea, sugar etc.. anything that can serve the protesters says Barro.

This weekend, “Y’en a marre” gathered at the Obelisk to ask Wade to withdraw his candidacy. Young sat on the floor said they would continue fighting against what they describe as a “constitutional coup”. “Wade has violated the Constitution by passing his candidacy. We will not recognize him more from Feb. 26 as president. We will fight until he left peacefully , says Ibrahima Thioune young demonstrator. Among them, political leaders like Talla Sylla, Cheikh Bamba Dieye, Ibrahima Fall, Ibrahima Sene etc. But also of the Senegalese publicly known as the former goalkeeper of Senegal Oumar Diallo. According to the Senegalese international who was speaking, “Each Senegalese must get up to defend his country. That’s why I decided to talk because I’m concerned. I am a member of the national technical department, they exclude me if they want but I can not remain silent ‘, Diallo has indicated to the cheers of the audience.