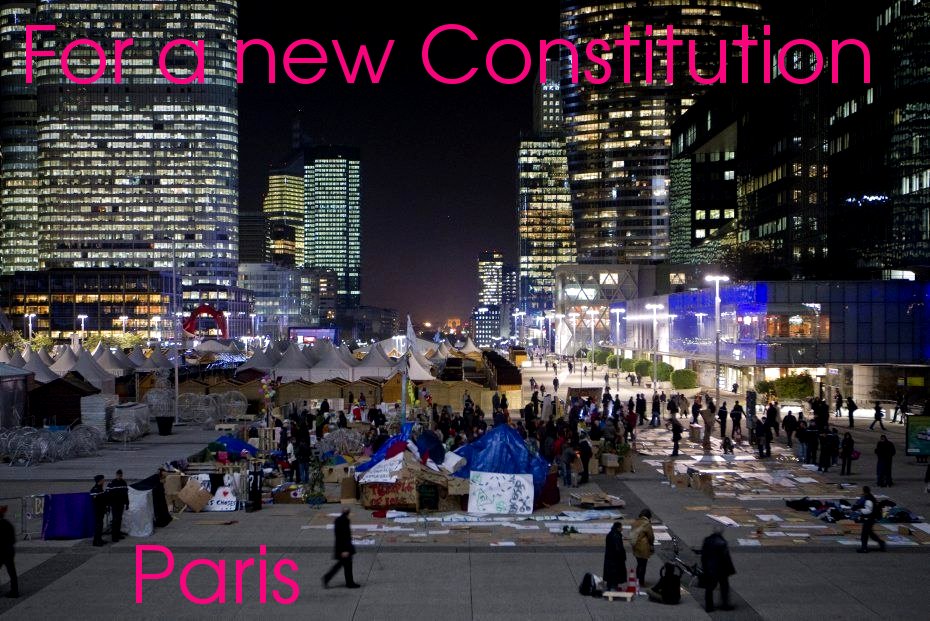 After Metz, Quimper, Nantes and Lyon, the Paris General Assembly has decided on Sunday 22 January 2012 to join the process for a referendum to hold a Constituent Assembly, in response to the frequent question “What do you want?”, which we still answer by saying “Real Democracy Now!”

What we want is for the people themselves to finally make the decisions.
Those who hold power should not be allowed to write the rules that govern power.
Because “Our dreams won’t fit in their ballot boxes,” we call on you, in every city and town, to take part in the referendum for a Constituent Assembly.

Our goals will be the ones each of you will set down and organize to:

– leave the old  politics behind

– change the economic and institutional system

Inhabitants, citizens, we call on you not to wait for the presidential elections, but to start campaigning now to hold a referendum on the question:

– Do you want a new constitution, written by and for the people?

Everywhere, between 14 and 22 April and 28 April and 6 May, in cities and towns, in neighborhoods, on each campus, in front of each company, everywhere people gather and pass by, we need to set up polling places, assemblies, and germinate the seeds of democracy.

Declarations of Grievances – with proposals and statements of indignation – will be drawn up, in which anyone who wants to can contribute to this collective process of reflection.

Where groups of Indignadxs have not yet gathered, beginning now, committees for a Constituent Assembly should be formed and begin to campaign and hold debates in the streets, in the squares, and at times in sheltered places.

We have let 1789 remain asleep in the museums. Now we intend to wake it up and start the process of change.

We call on everyone who so desires to join us and participate actively in the democratic change our old institutions are incapable of understanding.

Let those in power tremble, for the people, united, will never be defeated!

We propose that everyone who wants to see this project come to life meet in Clermont on 4-5 February and in Paris 7-8 April.  There we will discuss the progress of the referendum with the cities and towns, and plan for what is to come after the referendum.