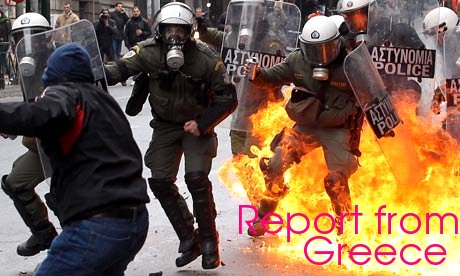 What happened yesterday words cannot describe…
The brutality of police repression units cannot be put into words.
In these few lines I will do my best to narrate what I witnessed first hand, along with at least 500.000 of my co-citizens.

Early afternoon around 18:00. Ermou St is the most famous pedestrian shopping road, leading to Syntagma square, where the Greek Parliament is located. Thousands of people, many holding their children, marching down the street to protest against this unconstitutional Government’s ill will.
The road was packed and everything seemed strangely peaceful, although in the background few sporadic explosions of tear gases were heard from the far end of the square which led some of the early protesters to withdraw momentarily.
I thought this was a good thing, we could keep our forces recycling to keep the pressure on.
I thought wrong.
A squad of the special devision of the Greek Police (called MAT) were marching through this packed shopping road, kicking and pushing with their shields!!! People were yelling against them, some throwing bottles of water. And then the nightmare started. The state hooligans threw military tear gases in the squeezed crowd creating havoc and mayhem. People were screaming in panic from suffocation, caught totally unprepared by such unprovoked brutality.
I could not comprehend for the life of me that this is happening at Ermou street where moments ago a father held his child up his shoulders. I was caught off guard not even wearing my cheap anthrax mask…
Behind me a girl passed out, out of panic and suffocation. I held her together with her boyfriend to save her from being walked over..We took a few more steps in tears, throwing up, and then she fainted again. We held her trying to create a protective circle from the crowd that was retreating disorderly.
Third time I could not take it, we were inside the teargas fog and I could hardly see them anymore. I let them go and amidst tables and chairs I moved on to grasp a breath of clean air, otherwise I would have fainted myself.
At the next street we started counting casualties. Everybody was shouting in rage. “All these MAT-assholes are your neighbors! FIND them and disclose where they live!” I yelled back.
After a short passage through the flooded Klaythmonos square we arrived at Fillelinon St.
Battle scenes at the streets. Non only the so called usual rioters but people, plain people throwing stones and broken marble fragments.

Next Amalias St to find some friends and there again it is full of people. Wherever you go a flooded sea of people! The group of the communist party (PAME) was going somewhere as usual. Somewhere far from where it should be…towards Sygrou…
At Amalia hotel I find Yiannis. Things were relatively calm.
An American-German reporter inside the crowd was being a smart-ass. He said Greeks hate their country. I was not at the spot to get my hands on him, but there were others. He ended up running in panic to enter the hotel while two or three outraged people ran after him swearing.
Panic, and justified one, indeed.
“Dear friends German, French, international businessmen thinking that you will come to buy out our water and electricity public companies and “reform” them to YOUR best interest, this is how we will ‘greet’ you. Hunted down on the streets!”.
At a narrow street next to the hotel some are smashing up marbles to use as ammunition. Further down is Fillelinon st there was a MAT squad for targeting practice. Young people with the help of elders were “showing their appreciation” for the safety they provided.
At Amalias avenue again, loud sounds. Another MAT squad has suddenly appeared from behind in order to cut the crowd in two. They were outnumbered and retreated after some marble bursts from rioters.

Time to try to get back at Syntagma. Unexpectedly, the coast is clear. I have been downtown from 18.00 and it took me 3 to 4 hours to finally get to the much desired point. There, we got together with a group of young lawyers. Nobody was wearing a mask from our companion. I shared with them my fear that in 5 minutes tops, cops will raid on us. Unfortunately I was right.
Chemicals were everywhere! People were shouting “Stay Calm, Stay Calm!”, but I knew the teargas cloud hadn’t yet arrived. Once it did anxious on suffocating, people were climbing down the Syntagma stairs in a hurry. I pulled my friend and went to the side, at the grates. We fell onto a MAT squad. When the stairs seemed empty, we descended too, in the foggy atmosphere, in order to avoid being beaten by those bullies.
But that wasn’t enough for them. Those perjurer cops teargassed all Syntagma square from higher ground! We split towards Grand Bretagne and Panepistimiou st.That was a bad move. It was a “playing ground” for cops and “rioters”. As to whom is the rioter, everybody should answer this by himself. A molotov bomb reached a cop and outside the metro station a flash grenade landed on my foot! Not beside but actually ON my foot 🙂
We moved further down the street. Outside the Currency Museum a graffiti said “No more saving us!”.
That’s where magic happened…
A loud continuous noise could be heard.
What was that? a friend asked
“It’s the noise of tanks!” I said jokingly.
Guys in hoods and masks were hitting rhythmically the protective iron gates of the banks and multinational companies!
But they were not alone! In moments thousands of people joined them, started banging rhythmically with bear hands on the iron, shouting and whistling! This war chant could be heard everywhere in the central of the city and the Parliament as well!
We were in awe.
The street was filled with barricades. Firemen in vehicles were trying to put out the flames while some police forces were outside the University gate. “Go inside you illiterate pigs to learn how to read!!” the crowd screamed at them.
Further down the street towards Omonoia square, more flames. Rioters were smashing a gold-exchange shop, one of many who suck up people’s blood. We were all shouting “Tear it down to pieces!”. Close by, looting was going on inside an armory shop, where many swords and pointy objects found their way towards the MAT forces. Suddenly, from the square, the sound of a bomb! Not a molotov … but something bigger…
After saying goodbye to some friends we headed back to Syntagma through the bombarded streets.We crossed through the MAT forces. We we wearing no masks. They seemed exhausted. A cop narrated to the others how he was “pumped up” throwing stones back at the rioters. I thought to myself.: Do those but-heads understand what will happen to them when people take justice back on their hands? We were passing between their lines and they seemed like sheep outside their corral.
Syntagma 23.00+ much fewer people now in front of the Parliament. Somebody was playing with a trumpet the national anthem. Not very successfully. A camera rushes behind him to get a good shot. He turns and says the inimitable “Would you rather hear me playing ‘Strangers in the night’ ?”.
MAT forces in blue (not army green) uniforms are now standing outside the parliament. Some women shout at them that they will take them down. A guy walks up and down in front of them, like a sergeant in a military inspection, swearing “transvestites inside!” “Not 20 euro, nor 15 nor 10. Gratis transvestites inside, and a nice pussy, Kaili”.
We stand at the pavement listening to the voting.
Petsalnikos (president of the Parliament) asks: “Is there anybody who didn’t hear his name?”
YEAH, YOU MOTH@FUCK@ , ALL OF US!