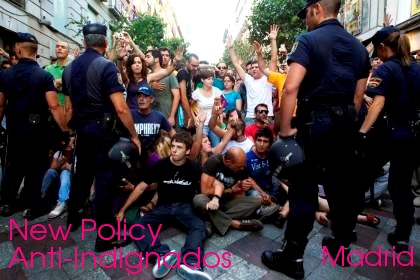 The Madrid meeting that the 15M has been holding every Tuesday in Puerta del Sol (‘cafes indignados’) to discuss various issues has been broken up by the police, who proceeded to ID those present.
“The police have broken up the debate action held on Tuesdays in Sol. More than 50 people ID’d, mostly passers by who have been banned from stopping to read and discuss” stated @Danimad000 on Twitter. “They didn’t let anyone take photos, they took mobile phones, people confronted the police with dialogue, they did not understand why” he noted.
In this way the words of the Government Delegate, Cristina Cifuentes, are accomplished. She  aimed to not allow unauthorised assemblies.
Some of those present are asking for this news to be disseminated via social networks.
Cifuentes already defended the police actions during their charge against indignados who protested last Friday against recent labour reforms.