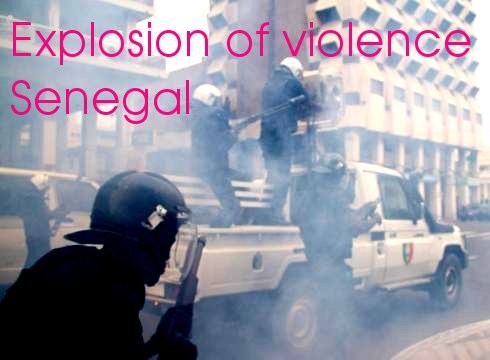 The demonstrations started last Friday in the Senegalese capital goes crescendo and have now reached the suburbs of Dakar and the city of Rufisque.
Left early in the downtown Dakar, precisely the zawiya El Hadji Malick Sy, to answer to the call of Serigne Mbaye Sy, young faithful tijaniya, supported by the youth of M23, refused to leave after the statement of the marabout, determined to defy the police.

Riots then broke out all around the zawiya until the front of the Interior Ministry and was then propagated up to the office of Medina and Tilène market.
Currently, the streets of the Medina are occupied by the protesters engaged in a rebellion front against the public forces. This ones were even in a time short of munition.
Around noon already, the cleaned Parcels have also begun to flare up and the time we write these lines, it is still the intifada in this part of the suburbs of Dakar.

But it is Cambérène we fear the worst. The entire population of the holy city of Layennes are in the street for over three hours. The call made from nowhere, calling the residents of Camberene to go out on the street has been widely followed. Gendarmes present there fell back and we just announced the arrival of the terrifying “Dragon”. We expect from one moment to another a confrontation as we note the arrival of police reinforcements. Young people are actualy controlling Cambérène roundabout and a part of the Turnpike.

But it is in Rufisque that the demonstrations have been broadened unpredictable. Started a little bit later, around 15h 30, protests continue around the current National Highway 1. The protesters pursued the forces of the Mobile Intervention Group (GMI) into the police station. The gendarmerie, situated at a short distance, was also stormed.

A young man of twenty years, living in the neighborhood of Colobane, was shot dead. The projectile struck his head toward the Total station located between the gendarmerie and the police in the district of Keury Kaw. He was evacuated by the Red Cross.