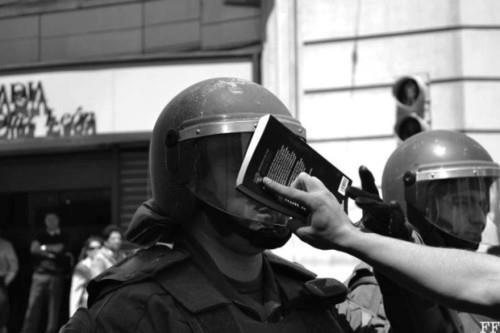 Demostration started at High School Lluis Vives, students protests by funding cuts in education and last week’s police repression with a result of 17 students under arrest and some injureds, some of them seriously injured. Today 14 students were arrested, four of them underaged, and 4 students injured.
Police, using up to 25 police vans, dispersed the pacific demostration with brutality. For some hours Valencia downtown was taken by anti-riots police forces, dispersing students indiscriminately while they runs trying to avoid be beated by police clubs.
Students cutted some streets while they scream “thefhs to jail and money for education”, neighbours suports students and criticized police actions againts this childs. Marga Sanz, spokeswoman from EU at Valencia’s Parlament, said “we’re in a city taken by police, seeing images of brutal police agressions to childs, journalists and any walking people they found”. Two of the students arrested last week were released with charges, 8 were brought to justice.

[Update]
Hundreds of people assembled in the University to think about the next steps against the police brutality and educational cuts.