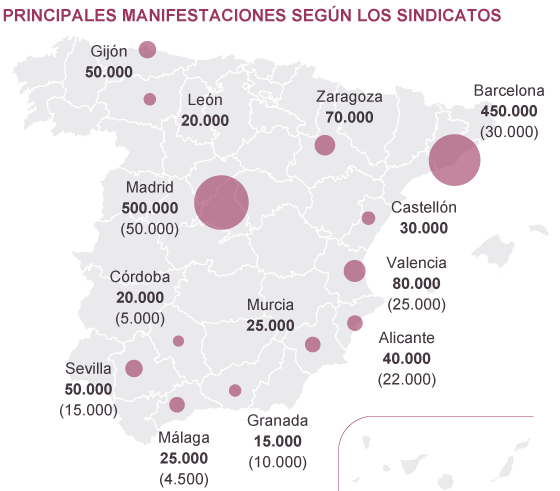 They said the movement was dead. That the indignation had subsided. That rage and frustration alone was never a sustainable motivation for continued resistance against the scourges of financial capitalism and the farce of our so-called representative democracy. Of course, as we all knew, these assertions were nonsensical to begin with. On Sunday, the rebellious Spaniards once again proved the incompetent experts and ignorant journalists wrong.

With over a million people taking to the streets and squares of more than 50 cities, a powerful message was sent out to the newly-installed government of Mariano Rajoy: your honeymoon is over! As the Conservatives prepare to unleash their neoliberal fury over the crisis-ridden country, pushing for radical labor market reforms and drastic austerity measures, the Spanish once again find themselves at the barricades, gearing up for another spring of discontent.

In many ways, the mass rallies — with over half a million converging in Madrid’s Puerta del Sol and another 450.000 in Barcelona’s Plaza de Catalunya alone – were only just the beginning. While this weekend’s protests largely consisted of organized labor unions, the decentralized 15-M movement has called for another wave of actions in the spring — including a global day of action, a pan-European strike, and the re-occupation of Puerta del Sol on May 12.

Yet as the people took to the streets, Prime Minister Rajoy used his address to the annual conference of the conservative Partido Popular to call upon the Spanish people for “major sacrifices”; even as the private financiers who contributed to the real estate bubble that underlies the country’s financial woes run off unscathed. Speaking in a dramatic tone, Rajoy called the labor reforms “just” and “necessary” to get the country’s fiscal situation under control.

But to Spain’s 5 million unemployed, and the millions who get by on partial or precarious employment, the question is no longer simply about whether the reforms are just or not, but whether they are physically sustainable to begin with. With roughly 23 percent of the population now out work (the highest rate in the developed world), livelihoods are coming under such extreme pressure that a Greek-style explosion of social unrest might not be far off.

Meanwhile, on Saturday, thousands of people took to the squares of dozens of cities around the world — from Berlin to New York — to demonstrate their solidarity with the people of Greece, who, following last weekend’s violent clashes with riot police, held yet another anti-austerity rally in Syntagma Square on Sunday. All of this follows the largest protests in Portugal so far, with over 350.000 marching against the government in Lisbon two weeks ago.

The indignation, in short, has clearly survived the cold winter months. Indeed, with the crisis deepening and right-wing governments across the world preparing their next wave of radical neoliberal reforms and draconian austerity measures, the outrage is only likely to grow stronger. For all these reasons — and more – we will be taking back the squares this spring; from Athens to Madrid, from New York to Oakland. We are everywhere. Expect us.