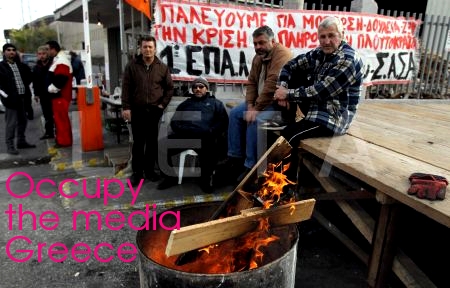 “Days of Strike” (click on cc for subtitles)
A short documentary on the strike at Halyvourgia Ellados’ steel factory in Aspropyrgos, Greece. For more than 2 months, around 300 workers are fighting for what elsewhere is common sense: an 8 hour day and a 5 days working week, accompanied by a dignified salary.

Eleftherotypia’s Workers are back with their own newspaper!

As from Wednesday, Feb. 15th, the kiosks all over the country are displaying one more newspaper next to the usual ones, a newspaper written by its own workers. A newspaper which does not only aim at bringing to the fore the fight of Eleftherotypia’s workers, but also seeks to be a thorough information newspaper, especially at such critical times for Greece.

The 800 men and women workers at the firm H.K. Tegopoulos, which edits the Eleftherotypia newspaper, from journalists to technician staff, from cleaning ladies to clerks and caretakers, have gone on a renewable strike since 2011, Dec. 22th as their employer has stopped paying their salaries since last august!
Eleftherotypia workers, seeing that their employer has requested application of section nr. 99 from the Bankruptcy Act, with a view to protecting himself against his creditors, i.e. in reality his salaried workers to whom he owes a total of approximately 7 million euro unpaid salaries (!) have decided, along with mobilizations and legal action, to have their own newspaper published. A newspaper distributed by news agencies all over the country, at the price of 1 euro (against the usual 1.30 euro for the other newspapers), in order to provide financial support to the strike fund.
As they haven’t been paid for the last seven months, the women and men workers at Eleftherotypia are being subsided by a solidarity movement from various collectivities or even isolated citizens who donate moneys or in kind (foodstuffs, blankets, etc.). By publishing their own newspaper and thanks to the money collected through its sales, they will be able to support financially their strike without any kind of mediation. In other words, they are making progress towards some kind of self-management.
The newspaper has been produced in a friendly workshop, in an ambiance that reminded of clandestine newspaper editing, since the management, as soon as they found out that the journalists go on with their publishing enterprise, first cut off the heating, then the system used by the sub-editors to write their articles, and last, shut down the workshop itself, even though access to the newspaper’s offices still remains free for the time being. Worker’s Eleftherotypia was printed at printing works that do not belong to the company, with the support of the press workers’ unions, because the staff of its own printing works felt reluctant to occupying their working place.
The management, afraid of the possible impact of self-managed publication of the newspaper, have threatened to have recourse to legal action; they are using intimidation by threatening of firing the editorial committee who were democratically elected by the general meeting of the strikers.
However, Greek public opinion, and not only Eleftherotypia readers, had been eagerly waiting for its publication – we were overwhelmed by messages cheering the journalists on publishing the newspaper by themselves- since dictatorship of the markets is coupled with media dictatorship that makes Greek reality difficult to read and interpret. Had it not been for the general consensus that was maintained by most media in 2010, based on the argument that there was no alternative to Papandreou government signing the first Memorandum, whose patent failure has now been acknowledged by everyone, we might have seen the Greek people rising up much earlier in order to overturn a policy that has proven disastrous for all Europe.
The case of Eletherotypia is not unique. Tens of private sector enterprises have long ceased paying their employees, and their stockholder have virtually abandoned them waiting for better times…In the press, the situation is even worse. Because of the crisis, the banks have stopped lending to companies while employers refuse to pay for it out of their pockets and choose to call on section 99 – at least 100 listed on the stock exchange companies have already done so- trying to save time in view of a possible bankruptcy of Greece and a probable exit of the euro zone.
Eleftherotypia was created in 1975 as “its sub-editors’ newspaper” during the period of radicalization that followed the fall of dictatorship in 1974. Today, in times marked by the new “dictatorship of international creditors”, Eleftherotypia’s women and men workers have the ambition to become the bright example of a totally different way of information, resisting against “terror” from the employers as well as the press lords, who would not like at all to see workers take in their hands the fate of information.
From: righttowork.org.uk