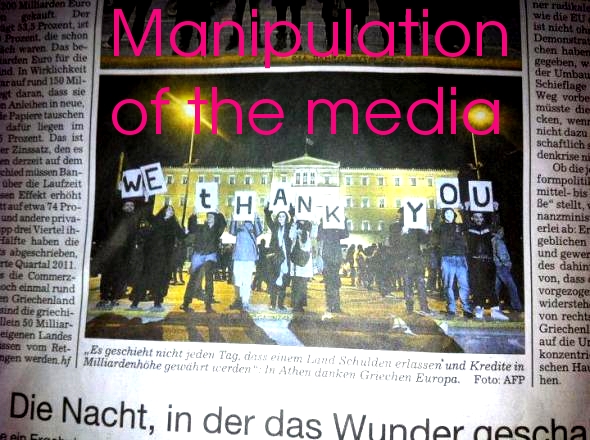 We received information from friends in Germany regarding mass media manipulation of recent activist’s work presented in our blog. A German newspaper published a photo of Greek protesters spelling “We thank you” commenting that the Greeks say thank you to Germany and its government for the 2nd bailout.

Οn 18th of February great protests were organized throughout the world but mainly in Europe with the moving title “We are all Greeks”. It was the way of Europe’s people to answer to the ongoing Greek economic slaughter taking place and to campaign the inevitable conclusion that these practices if implemented in Greece will affect the whole of Europe when it comes to labor reforms and austerity. Therefore, on Feb 18th, protesters in more than 40 (!) cities around the world yelled “We are all Greeks” in an effort to underline the common root of all this evil but also to express their solidarity to the Greeks who fight two years now, under unprecedented police (meaning state) repression, total lack of any democratic procedures and legitimate-like illegal procedures.

These demonstrations were on the track of a true “dialectic” between people of various European and other countries that expressed themselves in opposite way from their governments and the non elected EU – IMF – ECB officials..

On the same day a group of greek activists, in order to take upon the opportunity to continue this true dialogue, gathered at Syntagma square and with the help of some cardboard painted alphabet letters, they “spelled” the names of most of the cities which participated in this great mobilization concluding with a big WE THANK YOU towards them in the end…

The very next day, that true people’s dialogue obviously created panic to the corporate media everywhere…

The corporate Greek TV broadcasting talked about solidarity to “the efforts of the country on reforms”, some french media used the greek activist “we thank you” as a hypothetical “thank you” from the Greeks to the EU and last, but not least,.. in a recital of manipulative “journalism” a german newspaper has added another nail in the coffin of media trustworthiness around Europe, by publishing the “thank you”photo as a thank you to the german government..

If it were not so disgusting, it could be funny such a claim made now, in the last days of Pompei -or should we say Europe as we know it…
For what is Europe without democracy, equity and rationalism?
It is this circus of neo-mediavalism that we all experience.

For some of us in Greece taking to the streets almost everyday this media reaction is no news.
When we return home at night and the most patient of us watch “the news” we know what the TV – REALITY is all about. It is the same TV – REALITY that showcased a tranquil life in Tunisia while people were getting killed on the streets..

As a serious reporter should have done, we invited one of the greek activists who organized this event to share with us his opinion on the matter:
“There is no misconception in the slightest way the meaning of this action of gratitude was the response to the people of Europe and the World by naming each and every city that protested in solidarity to the Greeks fighting against the austerity measures and the debt-restructuring program.
There is no misconception in the slightest way this activist action is against the PSI the IMF and EU policies, therefore against German policy as well.
There is no misconception in the slightest way that European journalism is hitting bottom low by distorting and exploiting our actions as citizens of Europe presenting it as a promotion of the bureaucratic policies of Brussels.
We are deeply offended by this distortion of the truth.”

We are all people of the world, we fight as one.
The more authoritarian the ways of those in power, the quickest their fall…