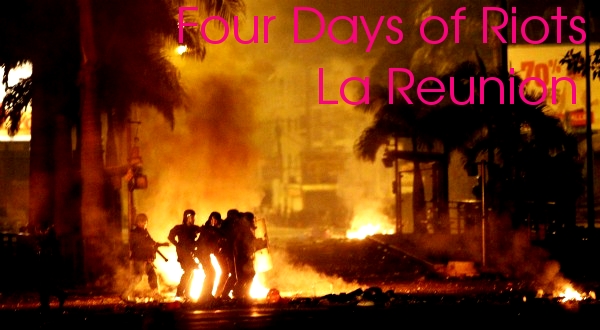 The riots began on Feb. 21, when rioters mingled with the drivers protesting against the rise of fuel prices and the cost of living. It is in Saint-Denis that the most violent clashes took place. Since then, violence has spread to a dozen towns on the island.

On the night of February 23 to 24, St. Mary, St. Andrew (northeast), Etang-Salé, St. Louis and St. Peter (southwest) have also been the scene of clashes between young and law enforcement.

Police and gendarmes have observed a radicalization of violence. Faced to stone throwing and petrol bombs, difficult to disperse with tear gas and rubber bullets the young thugs, some as young as 15-16 years. That night, ambushed in Saint-Benoit, a policeman was wounded in the face, the local Zinfo974 newspapper said.

This movement of protest against high prices and rising fuel prices is not new in La Reunion. The previous social crisis was in 2009, supervised by COSPAR (Collective of trade unions and political associations). But three years later, the fracture appears to have expanded further between the makers and the population.

In La Reunion, the unemployment rate is three times larger than in the mainland, approaching 60% for the 15-25 years old. And the situation does not seem to be improving in a French department where nearly 50% of the population lives below the poverty line, reminds linfo.re.