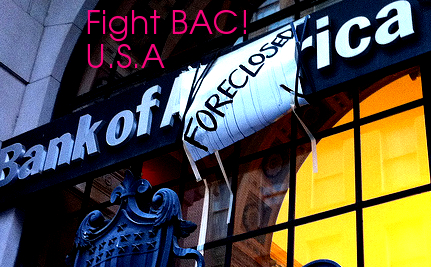 Return to Lender:
March 15 National Day of Action against Bank of America

Bank of America has failed

BAC is too big to fail – but it’s already failing. They’re on the brink of collapse. Experts believe BAC would collapse if it were forced to pay for its crimes or honestly say how much it’s currently worth. Last time we rescued the banks, we lost our homes and suffered, while executives enjoyed record bonuses and the banks conspired to grow bigger andmoreinterconnected than ever. We will not be sold out again.

We must break up BAC. It is a morally and financially dead “zombie bank” that lives on through bailouts, legal loopholes and dubious accounting. Breaking up BAC is the right thing to do for the people they harmed with their crimes, and for the economy as a whole. It is a crucial first step towards making finance serve our democracy, instead of forcing our democracy to serve finance.

We are going to fail Bank of America

We can’t rely on the politicians or the bankers to break up failed banks. We have to take matters into our own hands. Occupy Wall Street showed what’s possible when people come together to reclaim democracy for the 99%. Now we’re going to transform one of the country’s most powerful criminal organizations into something that actually helps Americans.

This spring, we’re taking on Bank of America. For too long they’ve preyed on us — but now, we’re turning the tables. Instead of letting the bank foreclose on us, we’re going to foreclose on the bank. On March 15 we will move our money, put our bodies on the line and bring their crimes to light. It time to break up the bank and create real alternatives.

FOR WHO: Anyone who is interested in tying their actions related to housing, students or the environment into a larger campaign to break up Bank of America, as well as anyone who is generally interested in joining this campaign.

PURPOSE: Bank of America (BAC) is not only criminal, it is also weak. Join this call to learn about a broad based campaign to fight BAC, break up Bank of America and prevent the next financial crisis. Matt Tiabbi from Rolling Stone will start the call by explaining Bank of America’s precarious position. We will then hear about actions already being planned, and discuss how you might be able to bring this campaign back to your local community.

You can learn more about the campaign here: