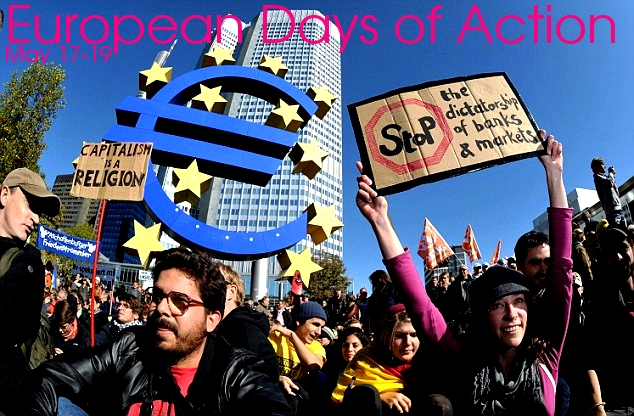 The 400 participants of the Action Conference from February 24th to 26th in Frankfurt/ Main, Germany, have decided to call for days of protest from May 17th to 19th against the crisis dictatorship of the European Union. We resist the disaster that is applied to Greece and other countries, against the impoverishment and denial of rights of millions of people and the practical abolition of democratic procedures resulting from the decisions of the Troika consisting of ECB, EU and IMF.

The days of protest in Frankfurt directly succeed to the International Action Day on May 12th and the anniversary of the first assembly in Madrid on May 15th. We are therefore sending a visible sign of solidarity to those people in Europe who have been and are resisting against the debtocracy of the Troika and the attacks on their livelihood and their future. Simultaneously, protests are being organised in the US against the G8 and NATO Summits in Chicago.

The choice of Frankfurt for the protests results from the role that the city has as headquarters of the European Central Bank (ECB) and of powerful German and international banks and corporations.

On May 17, we will occupy parks and main squares of the city to create spaces for discussion and exchange. On May 18, we will block the running business of banks in Frankfurt and turn our anger about the Troika’s policies into action. We will gather for a large demonstration on May 19 and visualise the broad base of the protests. From many countries and regions of the world people will travel to Frankfurt and participate in the days of protest.

The success of the protests requires a mobilisation that is actively supported by as many as possible: the Occupy movement, the initiatives of unemployed and the crisis alliances, trade unionists, Attac, the environmental and peace movement, migrants’, youth and students’ organisations, anti-racist, anti-fascist and left groups, activists of various local struggles and the Left Party.

The period of mobilisation includes the European action day on March 31st and international Mayday, as well as collective bargaining struggles in Germany that have our solidarity.