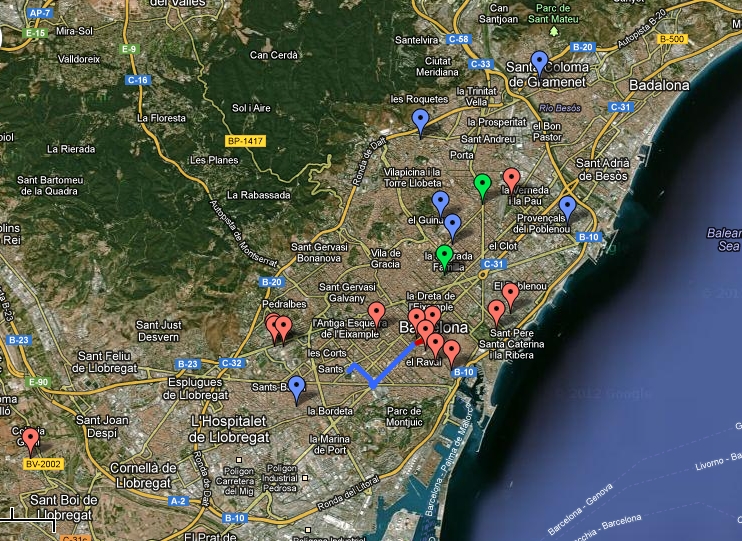 This is the “fightweek” on Barcelona and here you can see a map and a list of occupations (spanish and catalan) on:
– universities
– high schools
– healthcare centers
To protests agains the budget cuts.

We’re now engaging some livestream channels, here you can watch the regional/national one:
http://www.livestream.com/peoplewitness

And the international one to get the info translated:
http://www.livestream.com/icbcn

Monday: We did demonstrations, as everyday, and we annoyed the WMC with some workers that fight against their companies (hewlett packard, Telefonica/Movistar and Spanair).
Tuesday: Occupied universities in Barcelona and all around Spain, after spending the night on assemblies, started demonstrations, you can see good images about
it here.
Wednesday: The students are doing street cuts on big main streets. We have a helicopter above us. Mas media didn’t say much about this and I think that there’s some blackout to avoid fear on the WMC.
More people is coming from different cities to protest there this evening.
– Many banks symbolically occupied and left.
– Big streets paralyzed.
– An important radio station peacefully assaulted, the students read a manifest and then left, no issues.
– Barcelona stock exchange full of shit, literally:
https://twitter.com/#!/Endavant_OSAN/status/174838401579749376/photo/1/large
– This mobilization is trending topic in twitter in Spain:
https://twitter.com/#!/search/realtime/%23vaga29f
– Helicopter didn’t go away, a lot of police everywhere.
– Downtown still taken by thousands of people:
https://twitter.com/#!/Joan_Linares/status/174838153906106368/photo/1/large
Thursday: As you could saw on the Washington Post for example, there was some violent actions, but it was minimal and the action was a big success in my opinion.
The incident was about some burning trash containers to stop the police to go on with their vehicles, and then some guys that broke the glass wall on a bank building. Nobody was injured in this, the injured appeared after the police run over them…
Here some explicit multimedia content:
Cops working: http://www.youtube.com/watch?v=JjDbcAwahhw
Assaulted bank: http://www.youtube.com/watch?v=R2q6QtH8rQA
Most demonstrators: http://www.youtube.com/watch?v=jibpyjLIp_o
Few people was arrested, no one was on the violent group (if we can call them violents), they were arrested for nothing and I think everybody should take a look to this video: http://vimeo.com/37687093
Cops are due to identify themselves, no one does, the guy is showing his ID card to protest about this.
He was arrested for some hours.
I was at the top of the wall in front of one of the squares (the protest was in many places), it was closed and there was some plainclothes police.
The near metro stations and streets were controlled or closed.
Finally the day ended up with some assemblies and just normality, the World Mobile Congress participants went out of the congress by the back door because the main one was extremely closed and the other cities in Spain did great demonstrations too.