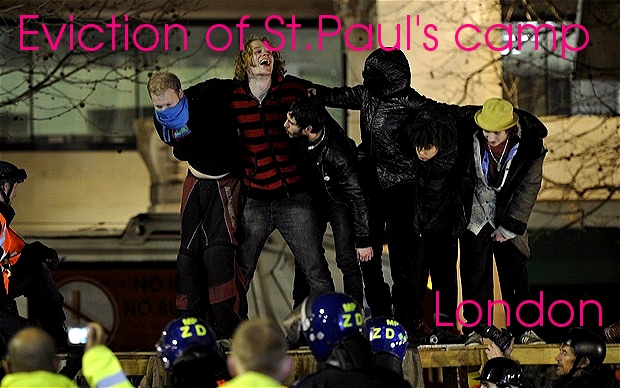 These are the words of George Barda, a member of Occupy London, who along with dozens of others, was thrown out of the encampment outside St Paul’s in the early hours of this morning.

Riot police and bailiffs, carrying out a court order secured by the City of London Corporation, wrecked the neat cluster of tents at the foot of the Cathedral into debris and rubble. The occupiers who had made the camp their home struggled to retrieve their meagre possessions. Some were made instantly homeless. Others were kneeling in prayer on the imposing steps going up to the Cathedral entrance. No matter – police still dragged them away. Some 20 arrests took place.

Rev Giles Fraser, whose early intervention as Canon Chancellor at St Paul’s had split the church elders, was prevented by police from reaching the protesters. Meanwhile a mile or so away, the occupied School of Ideas was also evicted despite their case still going through the courts.

By occupying a space bang in the very heart of the City of London, Occupy London constituted a challenge to the status quo that could not be ignored.
The Church of England hierarchy, the City of London and the Metropolitan Police have been itching to evict them from the word go.

Physically, the occupiers endured a harsh winter, constant noise and frequent harassment. Through Tent University and hundreds of sister sites around the country, Occupy London, inspired by movements in Egypt and the United States, pioneered the freeing of spaces for political debate where none had existed before.

The issues they sought to address are more burning than ever. They sought to highlight the need to address the social, economic and political injustices of the system in a democratic way. How this is to be done is being hotly debated. There are no easy answers, but one thing is clear: the “solutions” put forward by the existing political parties serve only the interests of the 1%.

The general assembly at 7pm tonight on the steps of St Paul’s will be discussing the next steps for Occupy London, including plans for a long walk around the metropolis in May.

A World to Win salutes all those who took part in Occupy London. Doing what you have done is a bold and courageous move in the right direction. It is indeed right to reflect on what has been achieved and develop ways to extend and expand the original aims of the movement.

Finding economic and political alternatives to the rule of the 1% is the way to go.