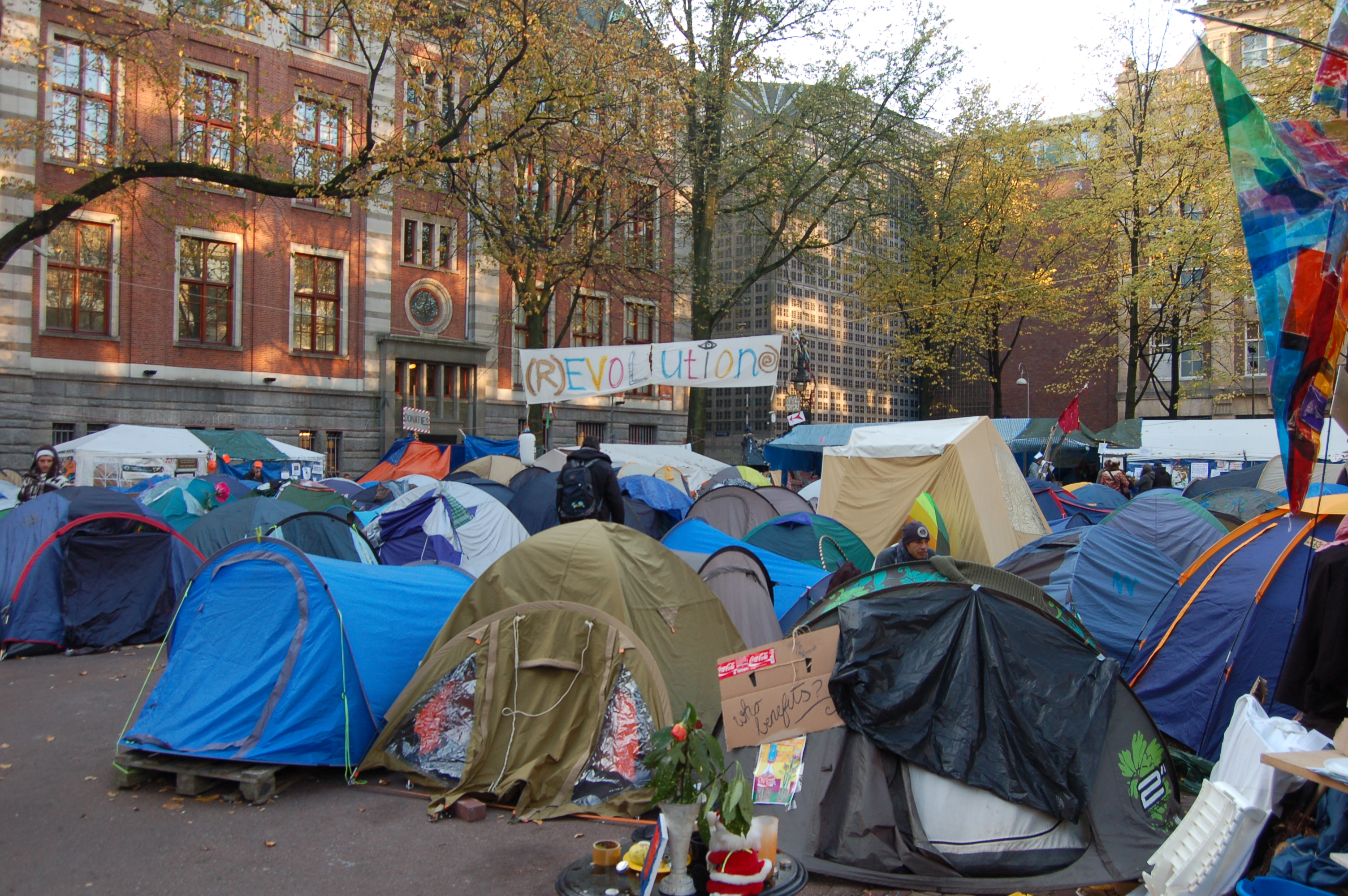 I turned to the man who had kindly offered me a lift as he explained, “We cannot keep
living like this. Everything is going to crash soon. There are too many people and
nobody is really doing anything… And do you know what? I’m looking forward to
it.” This was not a Mayan prediction. This was not whispers from any omnipotent or
enlightened being. This was not a crazy, envious, depressed or drunk man’s ramble.
David, our naysayer, drove a Hybrid and worked full-time distributing electric bikes
in an expanding and profitable market. David is 32, and he is not alone. Many people
I have spoken to predict the coming of a cold-shower global moment, and most of
those people believe it is necessary.

As a long-term global member of the Occupy community I have noticed a shift
in both public and private attitudes of persons interested in this movement. From
the outside and the inside, the result of four months of continuous protest is a
growing sense of hopelessness and disempowerment. After establishing independent newspapers, community centres, people’s courts, record labels, information networks, working communities where food, shelter and security is free for all, etc. etc. the question remains: why aren’t more people getting excited about this movement?

Lets be honest, the Occupy brand has been incredibly successful. If Occupy was a type of hair gel, Rod Stewart wouldn’t leave the house without it. If Occupy had been a TV show, Celebrity Big Brother would have to compete for viewers, or change timeslots. If Occupy had been a product of any description it would have won
international industry awards for outstanding promotion and thousands of young men and women would feel slightly better about themselves for a day having purchased its identity enhancing qualities. Yet the public perception seems to be that Occupy was a failure.

Winston Churchill stated that “A pessimist sees the difficulty in every opportunity; an optimist sees the opportunity in every difficulty.” As an eternal optimist I constantly have to engage with a ‘realist’ analysis of situations otherwise I’m never taken
seriously. Even looking ‘realistically’ at the past four months, the amount of energy and the diversity of ideas that has been channelled into this global movement is astounding. Teachers; doctors; retired and serving members of the armed forces; lawyers; bankers; musicians; students; pensioners; disabled persons; the homeless and the independently wealthy; journalists; techies and ravers and film makers and families; all walks of life, all classes of person, all voices have been represented. Granted: there were some people involved in the movement who did not own suits or
attend Oxford University. Granted: there were anarchists, alcoholics, artists, young people and other dangerous unwashed individuals living outside St Pauls Cathedral (which Mr Churchill also famously stated must “be preserved at all costs”). Granted:
there was not one simple message or universal reason why the people were protesting.Granted: it did not destroy capitalism or reshape the financial system overnight. However, for commentators and occupiers to suggest the movement has failed toachieve anything seems to be unfairly cynical.

While David wishes for the end of the suspense and the wake-up call of social orecological collapse, some other people around the world are attempting to find
other ways of moving our society forward. These people have suffered the chills
of winter and sacrificed their own individual space in order to engage with a wider
community and speak up against environmental destruction, corporate greed and
corrupt political systems. They have raised a voice and built communities around the
belief that “another world is possible”. Now after multiple evictions, arrests, public
condemnation and defamation, many of these active citizens are feeling disheartened
and increasingly pessimistic. Why is it that football teams who continuously lose
matches retain their fans? Why can a politician say “The evidence that led to us
invade that country was not correct” and still have their achievements lauded? Why is it not enough to celebrate critical analysis and self-sacrifice for a more ethical world?

It seems that there is a strong push from people to utilise the ‘hopeless defence’. “We are never going to be able to change the world. It is too difficult.” A resident of the Finsbury Square Occupy camp explained to me this morning. This defence seems
to protect us all from having to engage in our political system and participate more than we might consider comfortable. This position means that we can blame ‘human nature’ and throw our hands in the air. It is such an attractive fail-safe that when
people rudely suggest that it is not all hopeless and we should not just leave the fate of the planet in the hands of those who profit from its destruction, we get really upset.

I suggest that the joy with which people shout, “See? They achieved nothing!!!” says more about our own fears of empowerment than illustrate any specific failure of a
movement. Ironically and unfortunately, it seems as though the inclination towards claiming hopelessness actually results in the creation of a more hopeless situation. The most powerful and essential part of the Occupy movement is this embrace of empowerment and the taking of responsibility for ideas and issues bigger than oneself. As the activists feel increasingly isolated, and the critics celebrate their
doomsday predictions, it is pertinent to ask one more annoying question:

If the fate of the world has already been written into stone, what harm can ever
come from trying?