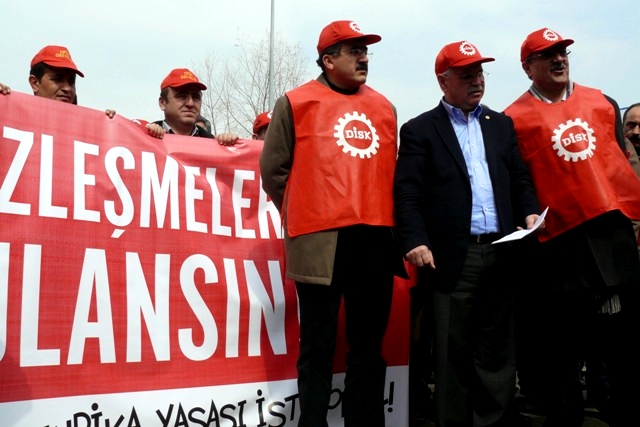 Today members of DISK organized a press declaration in front of the Ministry of Labour. In the declaration read by Erol Ekici (President of DISK,), it was said that “the Government is staging a two-fold attack against workers and one part of this attack is new Collective Labour Relations Draft Billwhich doesn’t even mention word trade union in its name.” Ekici also added that  “this new draft bill is against ILO Conventions No: 87 and 98, European Social Charter, UN Economical, Social and Cultural Rights Convention and 90th Amendment of Constutiton of Republic Of Turkey.”

In the declaration, it was said that “the second part of this attack is to apply National Employment Strategy Document which will destroy severance pay, turn workers into rental slaves by introducing Private Work Agencies, lower minimum wage and generalize precarious work.” Ekici also emphasized that the efforts to close DISK which were applied in 1970s and withdrawn after huge worker mobilizations, are now tried to be implemented by some statistical manipulations. And he added that “some officials even stated that DISK will loose its ability to do Collective Agreements and will be closed after this legislation.”

Ekici finalized his speech by calling Government to respect international Conventions, ILO Conventions, European Social Charter and 90th Ammendment of the Constution and added that DISK will go on fighting for a decent working life and a trade union legislation in conformity with ILO Conventions.