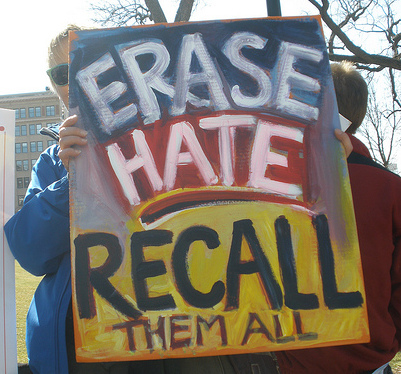 I mentioned to a couple people today that after the FitzWalkerstan reign is over and we can go back to being civil, forward-thinking Wisconsin, we will spend the rest of our lives processing all the incredible events that have happened to us. For now, all we can do is ride the wave and try to make sense of it all later.

The word that kept running through my head on this unseasonably warm and wonderfully windy day was CONFIDENCE. Confidence was in abundance at the Reclaim Wisconsin rally organized to remember the one year anniversary of Wisconsin’s notorious, union-busting Act 10 being passed by the state Assembly. It had been passed by the state Senate the night before.

At this time last year, we were angry and disgusted, but hopeful. We knew we had work ahead of us but exactly what that work would be remained unclear. We were energetic but not 100% confident that we could overcome what had been done to our state. Eventually the anger and adrenaline transformed into a statewide campaign to recall as many Republican back-stabbers as we could.

The work of collecting signatures is now behind us. More campaigns, more voter registration, and more get-out-the-vote drives lie ahead. Today, the 60,000+ people who showed up at the state Capitol building were relaxed, joyous, and confident.

Nobody even bothers any more to ask if we we can get rid of Governor Scott Walker and his cronies in the Senate. The only question is whether the Milwaukee County District Attorney will indict him before we get a chance to boot him out of office with a recall election.

I arrived early and met for coffee with some people who are connected with another blog for which I write occasionally. I saw some old friends and met some new ones, including a reporter writing a piece about the Wisconsin movement for a major magazine. He was raised in Madison and seems to really get what so many reporters don’t – that the ignitor of this revolution was Scott Walker’s trashing of Wisconsin’s  traditions of open government and equal access to the debate for all voices.

After the coffee klatch, I went to an “open house” for the new downtown Madison office of United Wisconsin, the truly grassroots organization that formed right after Walker dropped the bomb on Wisconsin. United Wisconsin is the driving force behind almost all of the recalls. There I bumped into a gaggle of Daily Kos users including  ruleoflaw and ruleoflaw’s dog…Lucky Angus MacPup. We listened to the Forward Marching Band and almost got run over by a giant Scott Walker.

From there, ruleoflaw and Lucky joined me on the walk to the Capitol Square. We eventually found Daily Kos user Quicklund and his two beautiful German shepards. I left them soon after to join up with a small group from the Solidarity Sing Along, our daily singing protest that is also celebrating its one year anniversary. We had been asked to sing from the stage during the pre-rally, and at the end of the speeches.

About ten of us took to the stage and looked out on a crowd that was later estimated to be over 60,000 people. Good thing we’ve had over 300 rehearsals or some of us might have been nervous. We sang three songs with the crowd joining in on the choruses. What a blast! And the best part was, we were going to do it again! For ten minutes, we got to be Woody Guthrie. Unforgettable. Then we headed back to the staging area to wait for our second performance.

We waited, chatted, joked, and listened to some great speeches. Lori Compas, the woman who started a recall drive against Senate Majority Leader Scott Fitzgerald, spoke to the crowd in her always calm but confident manner. She is now candidate Lori Compas, and I guarantee that this soft-spoken but determined wedding photographer is going to kick Fitzgerald’s butt.

When it was near our time to sing again, we moved back down the steps right behind the stage. We listened to John Nichols fire up the crowd with a rousing history lesson/pep talk.

After his speech, we heard Phil Neuenfeldt  of the Wisconsin AFL-CIO remind us of what started it all and what we needed to do.

John Nichols was standing near us, so I took the opportunity to talk to him and tell him that a  protest sign from last spring he quoted on the first page of his new book was mine. The sign said “I Thought Cairo Would be Warmer.” I told him I had read his book and would be honored to give him the sign. I was able to find it in the stack of signs I’ve saved in my garage.

He seemed genuinely excited about it. “I talk about you all the time,” he told me. (By “you” he meant my sign.) He took my phone number. I’ll send him an email with a link to the diary I wrote the day I made the sign.

I finished my day by joining rueloflaw and Lucky for a stroll around the square. We bought Solidarity armbands from the Boilermakers union. They make good dog collars, too.

The three of us found some outdoor seating at a brewhaus on State Street and had a cold beverage before heading out. Lots of folks stopped to read our signs, pet Lucky, and just talk about the amazing day.