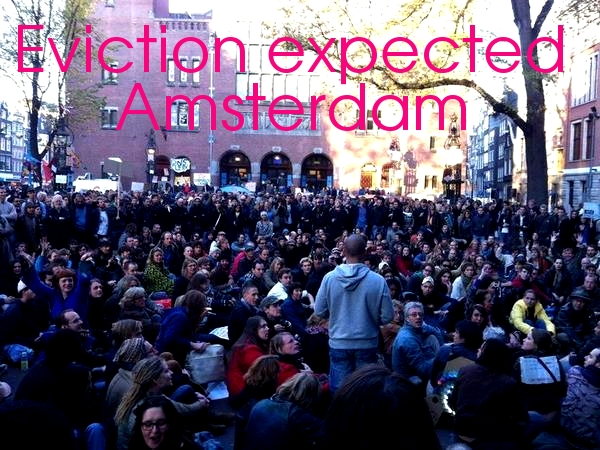 Occupy Amsterdam is again being threatened with eviction.

Amsterdam is home to the world´s oldest stock market – and it is #Occupied. Protesters in Amsterdam, along with dozens of cities across the Netherlands and hundreds throughout the world, took their square on a Global Day of Action on October 15, 2011, four weeks after Occupy Wall Street began. Occupy Amsterdam has occupied Beursplein (Exchange Square, directly in front of the Amsterdam stock exchange, now owned by Wall Street-based NYSE Euronext) ever since. Alongside the Acampadas in Spain and Portgual and the popular assemblies in Greece, the Netherlands remains among the most active Occupy movements in the non-English speaking world.

Other squares and buildings in Amsterdam and across the Netherlands have also been occupied, but Beursplein remains a centerpoint of the Dutch Occupy movement. On Dec. 3rd, Amsterdam Mayor Van der Laan echoed a line straight out of Mayor Bloomberg´s playbook: He claimed the ornately decorated and rigoursly cleaned encampment was a health and safety hazard. As in the U.S. and elsewhere, the Dutch media began demonizing the homeless, unemployed, and immigrant population inside the camp in an attempt to justify the mayor’s fear-mongering. The media also publicized a since-disproven rumor that no one was sleeping at Occupy Beursplein anyway. On Dec. 8, Day 56 of Occupation, most of the over 120 tents were removed and 14 people arrested.

As in other cities across the world where governments have evicted Occupiers, the media and politicians seemed completely unphased by the crimes of the very bankers Occupy has targeted, whose unpunished crimes are far worse than camping and sharing open services to the public in public space. In a cynical display of Dutch liberal ¨tolerance,¨ the city allowed Occupy Amsterdam to maintain a small, heavily regulated, presence on the square.

Dutch Occupiers, like their counterparts in the U.S. and around the world, adapted their tactics. After peacefully occupying an ING bank branch, Occupiers were brutally arrested again. Since then, Occupiers in Amsterdam and other Dutch cities have joined with students and labor supporters in solidarity with university cleaners occupying university buildings in demand for fairer treatment, rallied in solidarity with the people of Greece, taken to the streets with thousands across Europe against the Anti-Counterfeiting Trade Agreement, and more.

Now, they´ve received a letter saying they have until noon on Thursday to get out of Beursplein. Here are some of the reasons given, and Occupy Amsterdam´s responses:

The mayor forgets to look at this totally new sense of the word ¨occupy¨ and the encampment as a symbol. For many in the Netherlands, Occupy has given the image of a tent on a square a whole new meaning: it is a symbol of resistance against the current order of power and a symbol of hope for improvement. […]

Recently, there has been another multi-billion loan for Greece under horrendous conditions. Instead of this money being used to help people there directly, it is ending up in the portfolios of banks and corrupt politicians. The population, on the other hand, is forced to accept 22 percent loss in the minimum wage! With the ESM [European Stability Mechanism] convention going on, […] the little person in this story will lose more and more autonomy at the expense of the large European mega-banks. The need has never been so high! Occupy Amsterdam is calling on everyone in the coming days to come support us!

If you are near Amsterdam, come out on Thursday to so show support! And please help spread the word and show support to Occupiers everywhere. From Old Amsterdam to New Amsterdam, we are fighting the same global system. As a movement, we share tactics, visions, goals, and principles. The austerity and bail-outs wrecking Europe are the same Wall Street-based systems causing economic injustice in North America. The 1% does not recognize borders; neither will our resistance. And everywhere we rise up, governments use the same excuses to force us from the public square. Now, as the weather becomes warmer in the Northern hemisphere and more people return to the streets to protest inequality in these areas, the ruling elites are trying even harder to keep us out of the people´s parks.

The reason Occupy Amsterdam has been told to leave Beursplein is the same reason the NYPD attacked the re-occupation of Liberty Square: The 1% are terrified of the coming #GlobalSpring. This May, we will stand united. The 99% will not be divided. Occupy is a global movement against corporate greed, economic exploitation, and complicit political systems. And everywhere, we are solving the economic crisis – not by relying on the existing ruling class – but by taking direct action in solidarity with one another.

Update: Nearby Occupy Rotterdam may also be forced to leave by the end of March!
From occupywallst.org