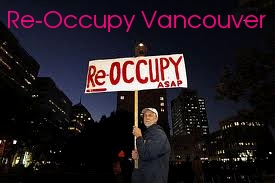 That is the question. Or maybe — how we ought to re-occupy. Though to this point it has been more a question of when, rather than if or how. Once Occupy Vancouver’s camp was evicted, First Nations elders reminded us that winter was the time for recuperation, storytelling, planning, and readying for the spring. And indeed, the call for a spring re-occupation has been in circulation almost since the evictions became general, with perhaps the loudest and clearest call coming in the form of the Spanish Indignados and the DRY (Democracia Real Ya) movement’s #12m12 call to make the 12th of May 2012 a day of global action: “Let’s turn the streets into the biggest loudspeaker on earth.”

The DRY website even has a clock counting down the days, hours, minutes and seconds to #12m12 (61 days, 23 hours, 7 minutes and some seconds left as of this writing), so time is indeed of the essence when it comes to figuring out the “ifs” and “hows” of re-occupation. I am therefore taking this opportunity to briefly explore re-occupation and to offer something of a proposal and rationale. I do so as someone who has both observed the movement closely and critically, at the same time as I have participated in it actively and enthusiastically.

State of the Occupation

Let me begin with a brief overview of where Occupy Vancouver is now. Like many other encampments, Occupy Vancouver passed through a brief hibernation phase after eviction, only to re-emerge earlier this year with an increasingly active schedule of actions and campaigns (most of which has been conveniently ignored by the mainstream media).

In recent weeks alone, active members of Occupy Vancouver have organized a demonstration outside the Chinese Consulate while Prime Minister Harper was in China shilling oil; held a 24-hour occupation of Brookfield Asset Management’s offices (Brookfield, the owners of OWS’s Zuccotti Park, own Island Timberlands, which had planned to log some of the last remaining 1 per cent of old growth Douglas Fir forest on B.C.’s isolated Cortes Island); and helped organize two pro-democracy rallies in response to the “robocall” scandal, amongst other things. Actions seem to be coming with increasingly frequency, and we seem to be getting better and better at organizing ourselves in rapid-response, issue-specific ways.

A movement — as long as it has adequate structures and practices in place facilitating as broad a consensus as possible — could conceivably continue in this way for some time. However, the question of re-occupying arises not only because this has been a movement of public occupations, but also because the current state of eviction has indeed thrown the structures and practices of consensus-building into disarray. The current state of the occupation, here in Vancouver at least, is one of semi-autonomous work-group generated actions that the community of the wider movement then buys into (or not). Another way of saying this is that divisions have definitely formed, and much of the “organizing” in the movement is now occurring outside the framework of the General Assembly. Yet the will to join together in direct actions and wider campaigns remains healthy — an energized potentiality waiting to be engaged.

From indignation to movement

The question of whether, and if so how, to re-occupy is bound up with the question of how to transition from spontaneous indignation (which got us occupying in the first place) to a movement built for the long struggle of systemic social transformation. These are not easy questions to answer, and there will be many diverging views. In this divergent spirit, I offer three parallel strategies the movement could and perhaps should simultaneously pursue. Included in these strategies is indeed an appeal to re-occupy, but to do so in particular, location-specific ways.

First, to be a sustainable and ultimately an effective movement, the occupations and occupiers need to move their organizational hubs into local, neighbourhood communities. This is, in one sense, to accept what has actually transpired over the past few months: large, centralized GAs are not entirely functional, and the bulk of the organizational work is now being done at the level of small affinity and work groups. The twin processes of decentralization and networking need to be pursued. In this way the structure and functioning of the global movement and the structure and functioning of individual occupations are coming to mirror each other. Globally, a city puts out a call for a particular action and other cities choose to join in solidarity actions or not; locally, a working group, or even more informally, an affinity group, suggests an action and other individuals or groups do or do not join in.

The other aspect of this decentralization/networking of the movement occurs at the level of the neighbourhood. Anywhere recent horizontal, decentralized movements have prospered they have done so by going into their communities and organizing from the base up. This is the case in Argentina, Athens, and increasingly so in Spain. The way forward, sustainably, is not by steadily increasing the size of the General Assembly (until all 99 per cent of us are somehow there), but by facilitating assemblies and doing committee work in every neighbourhood in every city (so as much of the 99 per cent as possible is engaged, exactly where they live and work). In this way, solidarity across the movement will increase, so that when a networked call for action goes out, the buy-in will be more extensive.

Second, when we re-occupy — and we must, because the primary claim of this movement in this moment is a claim upon the lost (or never actually realized) “public sphere,” on the “publicness” of our crises and their solution (we are all affected, we are all of us the solution), and, really, a claim for a new commons and new forms of “commoning” — we need to do so strategically. Too much of the “public” debate about the occupations last time focused on messaging (“we don’t know what you want!”) and duration (“but when will you leave!?”); if the re-occupations announce their “focus” (this is an occupation of ______) and their “duration” (we will be occupying this space for ____ days) then these peripheral and misplaced questions cannot dominate.

The idea of having a focused occupation — an occupation, say, of the electoral system, or of finance capital, or of the climate — could be another aspect and recognition of the movement’s global decentralized/networked structure. If the movement is truly global, then each occupation does not need to occupy in the same way, but can make unique/site-specific contributions to the movement as a global whole (see below).

Third, we need to invest in what Slavoj Zizek calls “red ink”: in his speech at Occupy Wall Street, Zizek tells “an old joke from communist times.” Someone banished to Siberia, knowing the censors would read his mail, establishes a code with his correspondents: blue ink will be for falsehoods that appease the censors, red ink for the truth. His first letter from Siberia is entirely in blue ink, and sings the praises of the life of exile. It’s final sentence notes (ironically!) that the only thing he is missing is red ink. “This is how we live,” Zizek notes. “We have all the freedoms we want. But what we are missing is red ink: the language to articulate our non-freedom”-“this is what you are doing here,” he tells the occupiers, “You are giving all of us red ink.”

To provide red ink is to provide a language for critique, as well as a language in which new alternatives to the capitalist system can be envisioned and experimented with. This is to say that the occupy movement has much work to do in extending what it has already begun: active experimentation in directly democratic practices and social “commoning,” as well as an ongoing practice of cultural production (websites, journals, books and educational programs extending and shaping the movement’s central ideas). If Occupy is indeed to transition from indignation to movement, such a transition will require a good deal of red ink.

A proposal for Occupy Vancouver

Picking up on the second point from above, I would propose that Occupy Vancouver “re-occupy” on May 12 (in solidarity with the global movement) under the banner of, and with a thematic focus on, “system change not climate change” and indigenous solidarity — by announcing a one-week climate occupation, with daily workshops, teach-ins, information-sessions, and actions all around the task of defending this planet from capitalist and colonial plunder.

Some rationale for this: first, as noted above, the Occupy movement is global, and specific occupations may best be able to contribute to the global cause by focusing on particular issues (at #OWS it’s finance capital; at OV it could be oil/tar sands/climate, as we are positioned at one of the key distribution points for tar sands oil); second, focusing on the environment does not exclude other important issues — our environmental, economic, and political crisis is one crisis, capitalism’s failure to deliver a sustainable, just and equitable life for all. Thus we can address the entire problematic, but do so in a productively concrete way that is at once specific and general, local and global.

The latter point is crucial. As Naomi Klein has remarked, “Climate change is not a big issue for the Left. The big left issues in the United States are inequality, the banks, corporate malfeasance, unemployment, foreclosures.” This is changing dramatically, and the spring and summer of 2012 will bring an intense focus on the environment — from Earth Day and the May 5 international tar sands day of action to the Rio + 20 conference in June. As Klein herself notes, conservatives who fear that environmental concerns mask a deeper critique of capitalism are in part bang on. A sustainable economy — one designed to be in harmony with broad ecological concerns — will inevitably be a very different economy from the one we currently live under. And it will take a new political system — a new organization of society — to bring our economic efforts into line with ecological necessity.

Such a broad program of social renewal is exactly what the Occupy movement has put on the table, and what it needs to take another step forward with its spring rebirth. I have great hope that Occupy Vancouver will do its part.

Stephen Collis is a Vancouver poet and Occupy Vancouver activist. His book on the movement, A History of Change: Dispatches from the Occupation, will be published by Talon Books this fall.