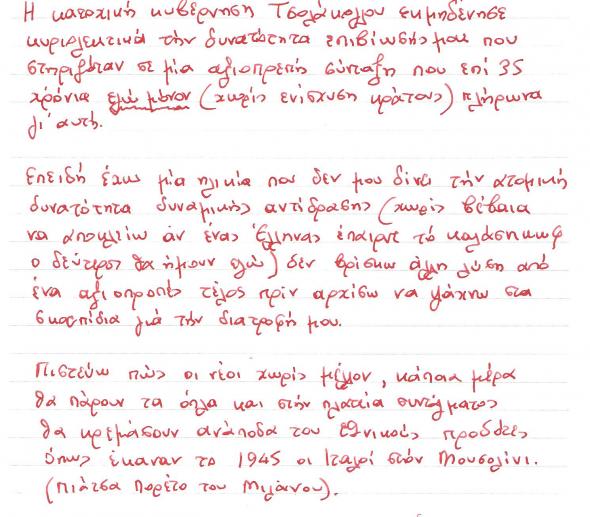 Yesterday a 77 year old retired man committed suicide in Syntagma square, Greece. He left a letter before he shot himself. Bellow is the link with the picture and a rough translation of the letter.

(Sent by our comrades of Syntagma Square media team)
”
The Tsolakoglou* occupation government literally
nullified my ability to survive with a decent pension,
which I had to pay (without government aid) for 35 years.

Since I am of an age that prevents me from giving a substantial response
(without of course ruling out the possibility of following a kalashnikov-wielding Greek),
I cannot find any choice other than a dignified end, before I would have to resort
to rooting through the garbage for my nutritional needs.

I believe that the youth without a future will one day take up arms and hang the
national traitors upside down at the syntagma square, as the Italians did in 1945
with Mussolini (Piazzale Loreto of Milan)

[*Georgios Tsolakoglou was a Greek military officer who became the first
Prime Minister of the Greek collaborationist government during the Axis Occupation
in 1941-1942.]