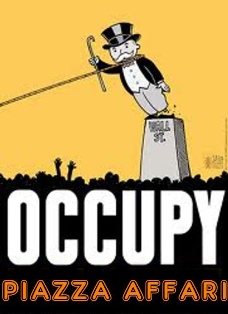 The 31st March we will take to the streets claiming the right to not pay the debt! The refusal of paying the debt of the states is an essential condition to build up a future in which the always growing inequalities, between the 99% and the 1%, will not be constantly reproduced. The largest part of the sovereign debts are illegitimate since they have not been taken out for the interests of the collectivity but in favor to the private investment funds (first of all the military industry) and to the financial global oligarchy. Public debts grew considerably in the last years to allow the bail out of the

private banks, the same banks that now speculate on the sovereign debts to impose policies aimed at boosting profits through dismantling of rights and welfare state and privatization of the commons.

We see as the financial governance leads the national policies imposing a compulsory administration of governments, either directly (as in Greece) or indirectly (as in Italy and Spain), through the diktat of ECB. So, we are witnessing, in Italy and all over Europe, a frontal attack to the rights of workers, the compression of incomes, the growing of blackmail in workplaces (Marchionne Docet) and the worsening of life condition, all justified with the commitment of paying the debt back. The rhetoric of the crisis become the excuse (or the opportunity, it depends on the point of view!) to impose sacrifices and to close spaces of freedom in the name of austerity and ancient morality. This is also a way to give legitimacy to the worse stereotypes: welfare is confused with family, women are thrust back home to care about domestic question, rights of gay, lesbians and trans are postponed when the crisis will be over, arts and cultures are considered a luxury that we cannot afford. Any political debate is suppressed and hidden behind the voice of the technicians!

As a mirror of the austerity, the legendary “recovery” so strongly pursued, is today proposed through the idea of project financing, meaning the big public works as TAV and TEM: the legalization of the waste of public funds in favor of a corrupted system of power in agreement with mafias, that damages the local communities and their history; the break up of the commons in the name of an imposed “modernity”. But these strong interests find movements of resistance, that articulate in different ways the refusal of the debt-mechanism, under the names of NO TAV and NO TEM: powerful struggles that stimulate a large and differentiated participation. In front of this legitimate resistance, the government of Monti showed its authoritarian face through a shameful repressive operation: a criminalization of the movement addressed to suppress any form of dissent and establishing once forever the “unique doctrine” of neoliberalism.

So, it is necessary to give a response which claims the right to dissent, the freedom of movement and the right to collectively refuse the payment of debt. Only through this process, actively practiced by the movements and starting from the audit of the debt itself, we can wonder to build a real power of opposition which breaks the perverse mechanisms acted by the global governance. This step becomes a necessary condition for a true exit from the crisis and the first moment of liberation from the dictatorship of the finance and form the blackmail it tries to impose.

To refuse the debt means to declare the unavailability to renounce to our rights and the claim for a real extension of them. It means to ask for a basic income released from the work, for the construction of a welfare able to allow the imagination of a future for new generation. It means to give centrality to the commons, rescuing them from the wild privatization imposed by the Troika.

It means that we are actually creditors. Creditors for a university as a place of sharing knowledge, creditors for an income which allow us to be free from the blackmail of the salary, creditors of rights, creditors for the future which has been undersold to banks and financial institutions.

The 31th March we will take to the streets to fight the measures of Austerity enacted by the ECB, to claim the right to default and the express our aversion to the preventive detention of the activists NO TAV.

The 31th March we will be marching with the banner “Blockupy Milan: We Will Not Pay Your Debt” and the day before we will make action in our places to launch the demonstration.

Towards the 1st  May, towards the siege of the ECB from the 17th to the 19th May in Frankfurt.