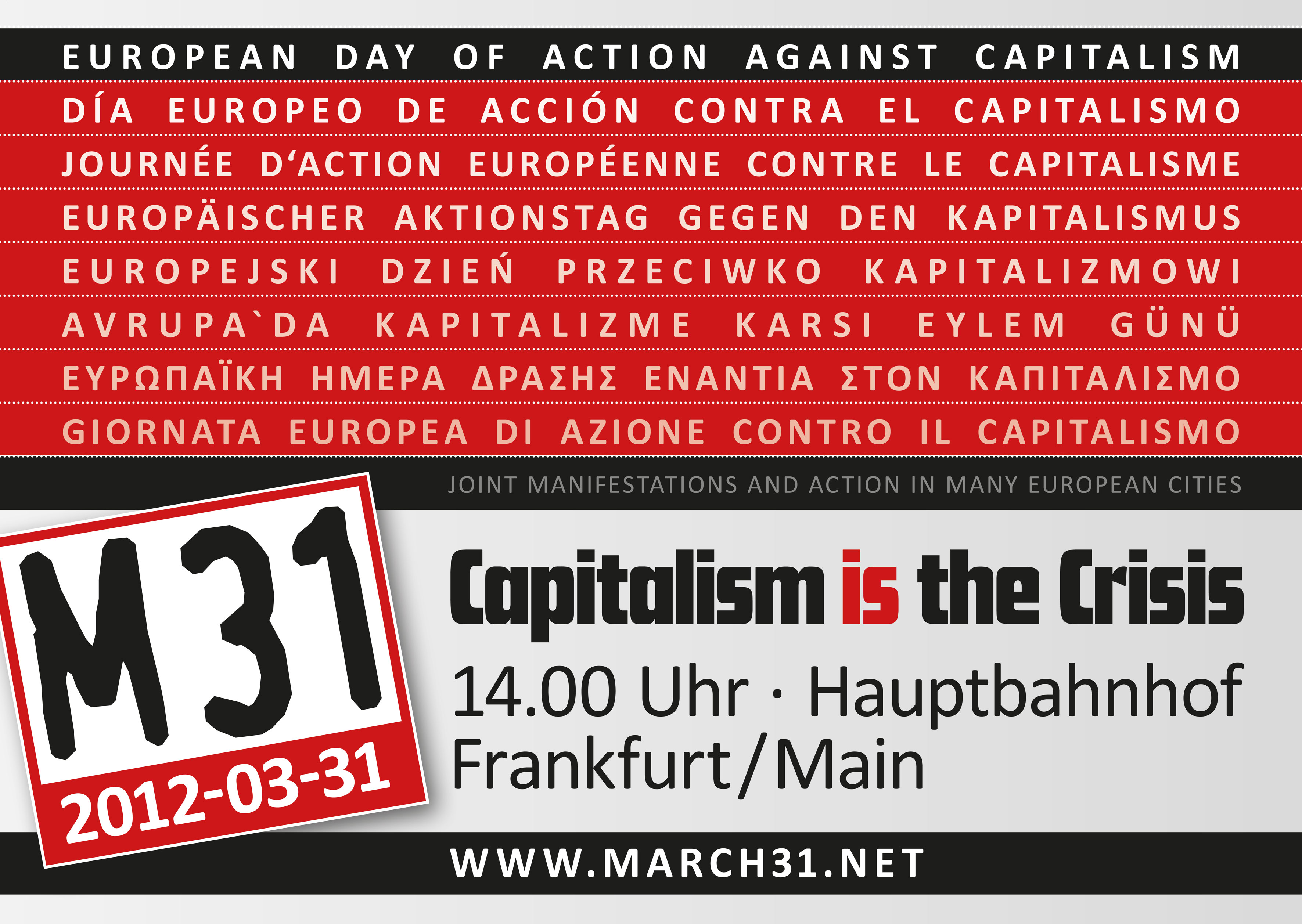 In less than three months, the M31 initiative was joined by leftist groups and libertarian grassroots unions in 15 European countries. On March 31st, thousands took to the streets all over Europe against capitalism and neoliberal crisis regulation. There were M31 demonstrations and rallies in Porto, Lisbon, Madrid, Toledo, Bilbao, Zaragoza, Murcia, Badajoz, Aranjuez, Castro Uridales, Besancon, Bayonne, Utrecht, Frankfurt/Main, Vienna, Modena, Kiev, Ufa, Ljubljana and other Slovenian cities, Zagreb, Athens and Thessaloniki. Simultaneously, syndicalist comrades in the UK, Poland and Italy staged anti-capitalist demonstrations and direct actions. All this came just days after successful general strikes in Portugal and Spain.

As M31, we want to overcome national divisions of protest and resistance with an anti-capitalist and anti-national agenda. Last Saturday’s Day of Action was more than a symbolic first step. Our Call for Action and dozens of assemblies in the run-up provided fundamental analyses of capitalism’s current impasses and authoritarian tendencies. We successfully criticized superficial resentments against „greedy bankers“ and the like. We were able to cooperate transnationally in great solidarity, despite very diverse social realities and political backgrounds. In some countries, M31 was able to bridge traditional gaps between leftist factions. There may still be considerable differences, but we found a way to deal with them constructively. On the other hand, it remains a challenge to confront widespread political illusions about a more social capitalism. M31 protests, too, have been very diverse. We can learn a lot from them, so there will be a documentation on this site.

Now we have to start cooperating on a practical level. We’re currently working on ways to communicate and intervene effectively. For the time being, M31 homepage and facebook will serve as a platform. With the crisis still raging, and with governments aligned to save capitalism on the backs of wageworkers and socially vulnerable classes, we can expect hefty struggles ahead. Capitalism can’t escape its own constraints. It can only contain them by way of coercion, control and exclusion. To coordinate our efforts across national lines, we will provide a political timeline for the rest of the year, with first hand information by M31 groups on the ground. But it will also be necessary to get active on short notice, supporting struggles transnationally. So we’ll establish a routine for quick coordination on a practical level.

As always, self-organization is the key. So let’s get busy!

Frankfurt: In a demonstration associated with the europe-wide anti-capitalist day of action “M31″, 6000 people demonstrated against the neo-liberal and authoritarian crisis policies of the EU. Parallel demonstrations and rallies were held in over thirty European cities, including Madrid, Athens, Milano, Zagreb, Vienna, Utrecht, Moscow and Kiev.

In speeches and greetings, the dramatic impact of current crisis policies in different European countries were discussed. Speakers of the M31 network saw today’s actions as a first step to link anti-capitalist protest internationally.

During the demonstration, paint bombs and stones were thrown at the headquarters of the European Central Bank (ECB), the center of the city police and employment agencies. Under the pretext of determining “some suspects”, police split off and encirceled one third of the demonstration at Allerheiligentor, using batons and pepper spray. Several people were injured, some significantly. Due to this disproportionate interference, the entire demonstration was blocked for one and a half hours, and its continuation was made virtually impossible. Subsequently, the demonstration – which was originally supposed to draw to the site of the new ECB headquarters – was dissolved in Frankfurt’s Ostend. More than 200 demonstrators were rounded up for more than 6 hours on the street. Lawyers were denied contact with those kettled. A spokesperson of the M31 alliance rated these police measures as “manifestly unlawful”.

After the demonstration was dissolved, hundreds of demonstrators marched through downtown Frankfurt. Some militant actions were directed at office and commercial buildings, including the Frankfurt town hall and the employment agency.

Leo Schneider, spokesman for the M31 Alliance, commented: “In Frankfurt, we sent a clear signal against current German and European politics of crisis regulation. This crisis policy aims to restore the competitiveness of European capital, on the backs of wageworkers. Because of a few broken windows, the police brutally attacked our demonstration, injured dozens and arrested two hundred demonstrators. Given the brutal impact of current austerity measures for the people of Europe and the world, this is absurd. Those militant protests were directly aimed at institutions that stand for neoliberal crisis regulation and intensified exploitation. As the reaction of demonstrators showed, these attacks on our demonstration will not break our resistance.”