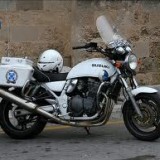 Feel unsafe when you go to pick up money from your local bank? You could rent a trained guard from squads of  Greek Police EL.AS. For just 30 euro per hour. For additional 20 euro you could also be escorted by a policeman on a motorcycle or accompanied by a police dog. A police helicopter is available to 1,500 euro. For regular customers, Greek Police offers price reductions.

In a bill prepared by the Ministries of Citizens’ Protection and Finance, all personnel, all vehicles, motorcycles, car and helicopters of the Greek Police EL.AS. can be rented by private companies and individuals. The full rental price list was published in the Official Gazette a couple of days ago. However the police officers will have no extra benefits for the services outside their normal duties, they will just be used as cheap labour forces specialized in security issues.

The Rent-A-Greek-Cop plan aiming to increase state revenues was revealed by Sunday edition of Proto Thema. Thus the newspaper claims that the current Minister of Citizens’ Protection Chryssochoides had no idea about the plan. The decision that was taken by his predecessor Papoutsis, deputy CP minister Othonas and Finance minister Sachinidis.

However if you think you can rent a Greek policeman to guard you while you withdraw your monthly pension from the bank, or a police dog would help you find some lost items inside your home, you are wrong.

In a statement EL.AS. explained that the rent services will be provided only to escort “the transport of  explosives and/or hazardous materials, private high-value goods, works of art and cash money, escort security services to individuals and educational services to individuals, availability of resources and facilities to film and television productions.” Stressing that such services were available free of charge for many years, Greek Police states that in many EU countries such services are offered for the same terms and conditions against payment. The revenues will land in the state budget and will be used to fund equipement upgrades.

Police personnel and equipment that will be rented out, will be removed from the police forces that normally should protect ordinary citizens in a country of an ongoing and increasing criminality.

In case you insist to withdraw money from the bank or go and pay your taxes or emergency property tax poll to Public Power Company and you are afraid to be target of thieves and robbers, you can do it like in certain districts of Athens (AgiosPanteleimonas, Kolonos). There groups of members of extreme right “Chrysi Aygi” escort seniors to the bank or public services – free of charge. “Just to protect the Greek citizens who feel unprotected” as Chrysi Aygi members claim. Left parties and civic organizations claim that Chrysi Aygi members apart from protecting seniors, they also attack illegal immigrants. But that’s another story…