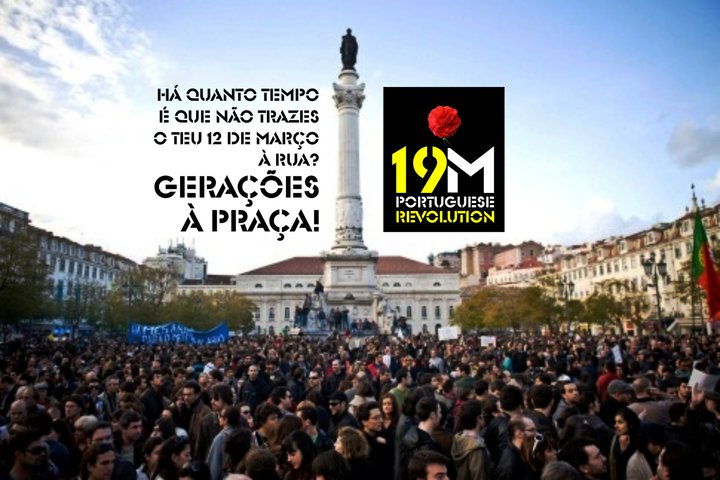 MAY12
There will be actions on the May12 in Porto, Coimbra, Santarém and Lisboa, and it seems that there are people in Évora already organizing something too. In Leiria, Braga, Aveiro, Faro and Vila Real is possible that someone or some group comes up with a demo, but I didn’t find any information yet.There have been already two assemblies to prepare the May12 in Lisbon (in which several groups are participating and finally managing to work together!), one in Coimbra and another in Porto. This saturday there will be assemblies in Lisbon and Coimbra to (I hope) define the final plans (or almost) for the May12.
As soon as there are definitive information about the different protests I will let you know. For now, I leave here the link for the protest in Santarém: https://www.facebook.com/events/361011567273888/
GENERAL UPDATES FROM THE DIFFERENT PLACES
– Popular Assemblies
Besides of what is related to the Global May, there are regular popular assemblies in Porto (weekly), Coimbra (twice a week) and Lisbon (different groups gathering in different rhythms). In Lisbon there are also several neighbourhood assemblies.
– Protests and Other Actions
In this cities and in other cities, some actions happen but most of them are still small, except some actions that start happen which are related with the National Health System – this saturday there will be protests in several cities against the destruction of the National Health System.
– Occupied spaces
In Porto, there is a school that was abandoned more than 5 years ago. It was occupied last year (on April 10 it was the one-year aniversary) and it achieved amazing things: right now the community of the neighbourhood is participating in the activities of the occupation and also on the organization of everything, and the children play and receive free educational support in the school. This project is called “Es.Col.A. da Fontinha” (Es.Col.A. means Collectively Managed Space, Fontinha is the name of the neighbourhood) and the city hall is threathning to evict the space. It is possible that the eviction takes place already on this night.
This project is mobilizing many people on a national level because there is not really tradition of occupying abandoned places in Portugal. In the end of march there was a “Acampada Es.Col.A” in the place with some dozens of people of several portuguese cities and many more from Porto itself. If the eviction happens it is probable that people take the streets at a national level (I hope so!)
You can check the blog of the project at: http://escoladafontinha.blogspot.pt/
More occupations of abandoned buildings might happen in the near future in other cities, there are people working (or at least thinking) on that.
– Communitarian Gardens
I don’t know how exactly to call to this “spaces”, but let me explain: basically, its pieces of abandoned land occupied by activists and normal people to create places where everyone can cultivate to provide food for the communities. There is one that I know in Lisboa and at least one in Porto. In Coimbra very soon a public abandoned terrain will also be occupied with this goal.
In short, things are developing in a each day greater rhythm, although still not many people are involved. I would say that from several hundred to not much more than one thousand people are participating in these kind of dynamics in Portugal. But we hope that in May the movement will grow a lot and several acampadas will certainly happen with that goal.
Portugal is on for the May 12. Portugal is also struggling for another world!
Francisco Norega
Coimbra, Portugal