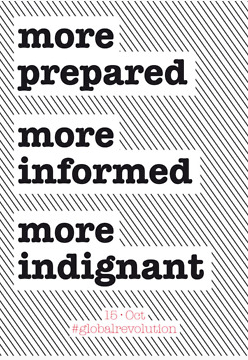 Politics, which is an open process of collective negotiations, debates, and decision making, was transformed in the last few years into pure administration. We are forced to believe that »delegated democracy« combined with the free market can effectively take care of peoples’ needs and that this is our final horizon.

In reaction, people are inventing a new politics now. The recent global protest movements are a response to the urgency of collectivity, and it is the people involved in them who make politics alive at the moment. In solidarity and together with the representatives of Occupy groups and new political formations, we suspend biennial »business as usual« and turn over the ground floor of KW to be managed and run by activists from different groups as an independent zone within the 7th Berlin Biennale. The purpose is not to create an »art installation,« but to provide a space without restrictions for activists to represent their work, advocate their positions, organize meetings and events, educate the public, and more.

Among the groups organizing and presenting their agendas are: Occupy Berlin, which has been holding general assemblies on the premises of KW since February 2012 after being evacuated from the park near the main train station; and civic initiatives led by artists such as Artists Occupy Amsterdam, who created their tent in the Dutch Occupy camp, and Occupy Museums from New York, which aims at revealing the hidden agendas and interests of the donors, founders, collectors, institutions, artists, and curators in the art world.

We question the common art logic that would have us believe that whatever is inside a gallery space is fake or staged, or can only imitate reality. We wonder why art feels so dead, especially in these times of protest. Galleries and museums are also political spaces where we can create and conduct political activity and fight for the implementation of more effective democratic procedures. Allan Kaprow once wrote about the »elimination of the audience,« a situation where viewers forget their position as spectators. We hope that everyone who starts their visit to the Berlin Biennale in the Global Square is willing to turn spectatorship into citizenship. AŻ & JW