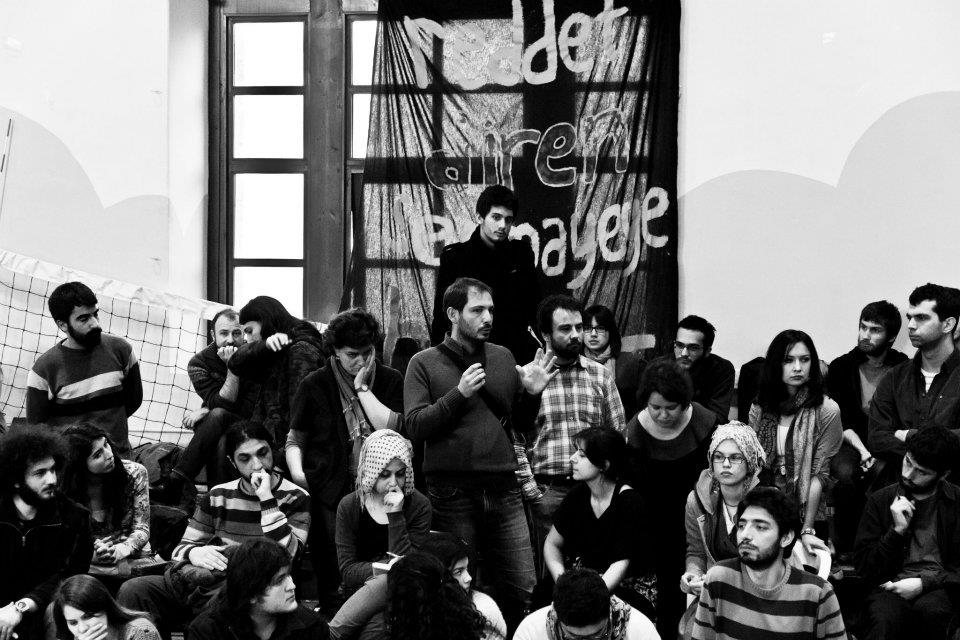 The occupation of Starbucks at the public Boğaziçi University has been going on for over a month and was at the beginning a struggle for clean, healthy and inexpensive food on the campus and for free student certificates and shuttle buses. Has these demands been met and has the occupation produced new needs and desires?

Çiçek: Our demands haven’t been met really although there is a rumour saying the shuttles are going to be free but it’s not because of the occupation I think…

Esra: In the beginning we couldn’t imagine that we would need a space like this one, we had some demands and we were and still are against the gentrification processes on the campus, the high food prices, the costs of the shuttle service and so on. But when we came here we realized we needed a space to meet, not only for the students but also for the workers and the academic staff. We didn’t have any contact with these people before, not even our professors.

Çiğdem: I have observed that there are different stratifications within the university, all of which are affected by this occupation. Professors have realized that they don’t get to discuss their problems at the university and are now doing so here and also by themselves. Students have understood that they used to mix only with a certain typology of people before the occupation. I came here with my friends from the translation club who have never been political but since they share the same problems as the people here – maybe they live in the over-crowded dorm or want healthy food at a good price – they feel like they want to contribute to the process. When coming here they also started to reflect upon their education and how the departments function. The occupation has created something common amongst the students and the professors and I think it will do so also for the administration. We had forgotten that the university exists for us, that we are the real subjects of it. Our occupation has created an awareness and actions in many other universities, at least seven that I know about, and now people are talking about a Canteen Spring…

Çiğdem: Starbucks, Burger King, Dunkin’ Donuts and various banks are invading the campuses, this is the visible side of it but there is also the insidious side of it since education tends to meet the necessities of the private companies. The science parks such as the Teknokent here at Boğaziçi want academic research papers from the departments. They want us to produce knowledge that is beneficial for the private companies.
Esra: The private companies make the students work for them as researchers and they justify this commercialization of education by saying that students can’t find a job otherwise.

Çiçek: One professor held an open course here in which she was saying that education is so linked with the companies they can’t produce “neutral or objective knowledge”.
Esra: I don’t think there can be any neutral science, universities have never produced such a science and on this point I don’t believe there is any difference between public or private universities. All public and private universities are connected to the Higher Education Council (YÖK). So we cannot talk about autonomy of any university without mentioning YÖK.

Çiçek: A professor in a documentary I recently watched told his story of how someone from the military came to school one day after YÖK was established (after the 1980 coup d’état) and said what the teachers would have to teach and how…

So there seems to be little or no point for you to defend the public university… What is your experience of knowledge production in terms of moving beyond state or corporate control, within this occupied space?
Esra: We didn’t experience such a thing collectively before coming here. One day people started to read Spinoza through a megaphone over there so it was named the Spinoza-room… (yes, everybody is reading Spinoza these days). Now, everyone has something to teach and we all listen and make questions. This is a process we miss in the university where you can just ask questions and perhaps make a little statement. There is no relationship with the teacher who is giving lectures up there from the black board down to us. In this hierarchical situation we become mere objects. Here, during our open lectures and informal education we are all subjects but so are also the professors. It is another process not at all as the formal education we are given normally. Some of our teachers are coming here to the meetings or to help out with things. The other day, one of my teachers in sociology told me he was not just supporting us but also feeling like a participating subject in the occupation. I think our problems are the same. Maybe they don’t sleep here (which I can understand) but they attend to our meetings and when they come around we are all at the same level somehow. And now I know teachers from many other departments.

Çiçek: In the beginning when we had decided to occupy and told the teachers we would do so, they were very cautious but when the meetings and the open courses started to take shape, which happened spontaneously, they realized that we spoke about problems they shared with us, about issues we have in common.

Esra: Yes, such as the exploitation going on here on the campus. Whether you want to be part of a corporation or become an academic, you have to do voluntary jobs or internships and carry out a lot of work in order to get experience. I did lots of voluntary jobs and the jobs may have been satisfying but how am I supposed to pay for my living at the same time as I work and also finish my studies? It is a trap and I think this is what you call precarity. Next year I have to pay off my study loan but probably I won’t be working or get paid so I don’t know what will happen.

Çiğdem: The subsidies and loans are cut off if you don’t manage finish university at the right time… I think we need to deal with this precarity collectively. We need to create alternative ways together, against these constraints imposed on our lives and I don’t think it’s about finding regular jobs for all of us but rather a regular income.

How do you think the future will look like for the Starbucks occupation?
Esra: Perhaps we will leave this space since too much of our energy is put into the management of it. If we leave the space it doesn’t mean we give up the struggle, it is just a matter of change in tactics, of finding new ways of struggle.

Çiğdem: The occupation has showed that everybody needs a space to meet. But this place is too small and now I don’t even think it will matter if we sleep here or not. All the students need a place but they have to pay to rent a space in order to meet, even the official clubs such as my translators’ club.

Çiçek: We have been talking about occupying other spaces in the university, changing the course of action… Our demands are bigger than just inexpensive food. We want to be in the decision processes of the whole campus.