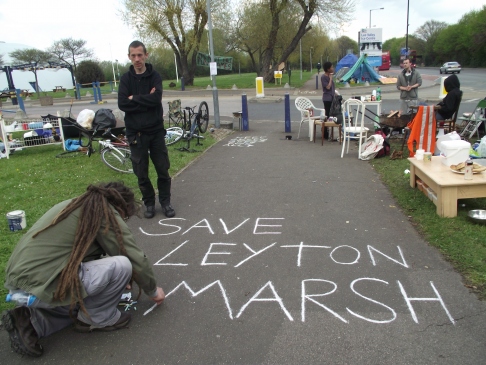 As a resident of Leyton (Waltham Forest Council-London), one can easily imagine my concern over the coming Olympic Games that will be taking place in a matter of months just a stone’s throw from my home. As the city prepared for the Olympic Games over the past year, I witnessed the complete reconstruction of Stratford city, including the creation of a gargantuan shopping mall á la Americana. The Westfield Shopping centre, which houses a cinema, a casino and a variety of clothing stores and other shops, all with the world’s most prominent brand names, even has the smell of the few years I passed as an adolescent in America’s famous shopping malls. I call this the smell of capitalism, or perhaps the smell of capitalism gone very wrong (all depending on whether you work under the assumption that capitalism can go well).  What this move also smells of is hypocrisy. An area that was once neglected, Stratford tube station is now filled with friendly personnel eager to show confused tourists the right direction in which to spend their money.

The cost of the Olympic Games on London’s, not to mention Britain’s, taxpayers has been one of the main issues of contention that those concerned about the effects of the Olympics on the country’s residents have brought up. How much we are spending on ensuring that the swathes of wealthy tourists coming to watch the Games are comfortable, secure and entertained is frightening to say the least, especially when one considers how that money could be used to improve the lives of those of us who actually live here. The cost of security has already reached 553 million, and the opening and closing ceremonies alone are going to cost the operation 41million. The total budget for the Olympics is 9.3billion. All of this in the name of the Olympic Games´ “Business and Tourism Legacy”, a legacy that will, nonetheless, leave east Londoners of future generations with a massive shopping mall the majority won’t be able to afford to shop in.

But for those of you who think we are exaggerating by highlighting the public’s role in paying for this excessive and unnecessary public debacle, you are right. The Greater London Authority (GLA) is only offering a mere 925million to the Olympic Delivery Authority (ODA). The central government is actually covering 67% of the costs, but for those who are worried, the National Lottery, is paying for the rest.

So keeping all of this in mind, and dwelling painfully on the fact that those of us who live in the area and will have to fight our way to work through one of the world’s most grotesque displays of ostentation, were never consulted, I must admit I was relieved to see that some of the local residents are actually fighting back. In an article entitled “Funding the Games” supporters of the Olympic games stated that a major milestone was reached in 2007 when the LDA (London Development Agency) met its commitment for the construction of the Olympic park and the regeneration of the Lower Lea Valley. The Lea Valley is a part of the Green Enterprise District, a project that aims to create a low carbon economy region in the greater London area. This new plan of “regeneration” sparked by the Olympics, however, seems to have pushed this last plan to the wayside. For residents of Waltham Forest Council and Hackney Council, part of the Lea Valley, this means the destruction of some of the area’s most precious natural spaces for the construction of facilities that residents will probably never be allowed to use.  The current situation in the Leyton Marsh is just one example of what are probably many projects of “regeneration” to come.

Earlier this month it came to the attention of local residents that Waltham Forest Council had granted permission to the Olympic Delivery Authority (ODA) to build a “temporary” basketball training facility on the Leyton marshes. Under normal circumstances, authorities would have to apply for planning permission to begin construction on land that in 2011 received a Green Flag Award, a national award that recognises the best green spaces in the country. However, while objections to the construction have been posed by local residents and businesses, and been deemed against a number of local policies, the “exceptional circumstances” that are the Olympics have allowed the council to wave all of these potential deterrents and go ahead with the facilities´ construction.  This is ludicrous when one takes into consideration the fact that several basketball training facilities that could have been renovated in order to provide the necessary services to the Olympic athletes already exist just a minute’s drive from the site of construction.

What are even more disturbing are the obviously false pretences under which the facilities are being constructed. Because they are meant to be temporary, no environmental impact assessment has been made. Considering the area’s diversity of wildlife, the development of the area could have multiple adverse effects on the biodiversity of the Leyton Marsh. In addition, the original agreement between the ODA and Waltham council was that only 15 centimetres of topsoil would be removed from the site. Because the site is meant to be temporary, no plans have been made for the removal or storage of this soil. What is worse, however, is that any visitor to the site can see that much more than 15 centimetres have been removed from the area, and that tests have found both lead and asbestos in the soil, making the soil actually toxic.

The quality of the soil and the supposedly temporary nature of the facility pose a variety of problems. Waltham Forest Council has received no guarantee from the ODA that the facility will actually be temporary. In fact, the temporality of the structure can be called into question by the very method of construction itself. Who needs concrete to create a temporary structure? In the case that it is not temporary, what will happen to these heaps of toxic soil? Where will they be stored and how will they affect the health of local residents? All of these questions have yet to be answered, and it appears that the council is in no rush to even acknowledge their existence. Look here for a video of the soil: http://www.flickr.com/photos/50435020@N08/7083442423/in/photostream

Questions have been raised over the potential transparency of whatever process will be used to dispose of the soil and other rubble from the construction site. A local resident and I watched in horror as trucks with concrete, soil and stones moved into the area with abandon mixing piles of healthy soil with the lead and asbestos filled soil. All this is going on in the backyards of both Hackney and Waltham Forest residents, and some of these residents have gotten angry. Look here for a video of local residents discussing the site: http://www.flickr.com/photos/50435020@N08/7083422451/in/photostream

With the spirit of the original Occupy Wall St. in mind, a group of local residents have set out to make their voices heard by Occupying to save the Leyton Marshes. Setting up tents and conducting direct actions next to and inside of the construction site, this dedicated group of citizens is determined not to allow the council to make important decisions about the fate of their homes while they sit idly by. Marches, rallies and other protests have been held with hundreds of local residents showing up to support the cause. While the camp has already been evicted once (only to move slightly further down the road), the council has ordered a strong police presence at the site. Several protesters have already been arrested and spent between 3 to 5 nights in jail for blocking entrance to the lories. Protestors are also questioning if workers on the site know that the soil they are handling is toxic, and whether or not the company they are working for is protecting their health.  The fact that taxpayers money is being pumped, not only into building this highly unpopular site, but also into the surveillance and intimidation of those who set out to protect it, is another of the many ironies in this sad story about the destruction of public land for the sake of greed and opportunism.

In order to support the Save Leyton Marsh movement visit the wordpress blog: http://saveleytonmarsh.wordpress.com/

Or to find out more about efforts to reclaim the Olympics visit: