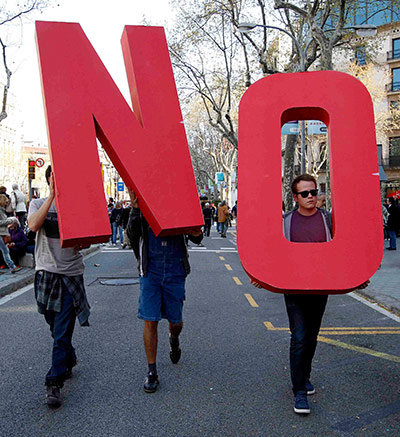 1 - SPAIN IN DANGER OF CUT OF CIVIL RIGHTS: A "DRACONIAN" REFORM IS ON HIS WAY...

The Spanish government, according to the Home Office Minister Alberto Fernández-Díaz, has recently anounced what has been called “‘draconian’ plans to clamp down on protests” by The Daily Telegraph, who reported as a big sign of criticism and alarm the fact that #soycriminial (I’m a criminal) and “Holadictatura” (hi dictatorship) became popular trending topics. Civil and political rights are in danger in Spain since the government is trying to change the Spanish Penal Code to criminalise “those who call for a demonstration or mobilization in any media” (such as social networking), that may “seriously disturb the public peace” accusing them of “integration in a criminal organization”. As this means that nonviolent and passive resistance is put on the same level as “criminal offence against the police”, peaceful protesters will be treated as terrorists.

In the same vein, the local Home Office Minister in the Governent of Catalonia made some statements on the 4th April about the promotion of restrictions on the right of assembly, hardening of the Penal Code, informant policy  as well as preventive custody and detention. Showing their concern for these suggested measures leading to a more repressive society, the federation of neighbours  of Barcelona FAVB called for a demonstration on April 14th rejecting cuts on rights and civil liberties.

Actually, a person in wheelchair had already been arrested 2 weeks ago for stopping in front of police vans during a protest in front of Barcelona’s prison asking for the freedom of the three young people in preventive remand since the 29M strike. They have been accused of being part of an anti-system group dedicated to attempting against the public peace in a dangerous way, and are now retained in prison by the decision of judge Carmen García due to the possibility of reiteration during the May 1st  (Workers’ day) or during the ECB European Central Bank Summit that will be held in Barcelona on May 3rd.

We have to point out that these measures will lead to a lack of legal protection for journalists, bloggers, tweeters… as well as opening the door to arbitrary police or legal actions which are a severe threat to freedom of information, press and expression. Without going any further, last week the arab spring blogger, journalist and activist Rachid Alí working at Terrasa Respon (a community center with grassroots functions), was arrested on April 9th around 7pm by 2 policemen in plain clothes. Rachid will take legal actions against what his lawyer considers an “illegal detention”.

Talking about journalism, let’s remember that few days ago a strange article appeared in the catalan newspaper La Vanguardia. In his writing, the journalist Enric Juliana accuses an Italian group with an anarchic matrix generated by the anti-TAV movment (a popular protest against the building of a high speed train in a beautiful Italian valley, Vall di Susa) of inspiring and leading any violent accident occurred during the demos of the last few years in Europe, here including the 29M in Barcelona. This has led to lot of critics by the Italian community and more.

This last event, together with the alarm due to the reform proposals, to the announcement of an increase in the number of riot police, make many think there is a well thought-out plan of repression.

Finally, a football supporter recently died in Bilbao as a result of being shot with a rubber bullet by riot police while celebrating his team’s victory. Even so, Spanish police trade unions support continuing with the use of rubber bullets.

Links:
Daily Thelegraph article:  http://tgr.ph/IBRfFb
Article about the ‘dictatorial’ changes to penal law: http://storyful.com/stories/25301
Article about the criminalization of the social network:
http://www.europapress.es/nacional/noticia-alterar-orden-publico-hacer-convocatorias-ello-internet-sera-delito-integracion-organizacion-criminal-20120411103059.html
Infos on the proposal: http://bit.ly/HNYhE2 (in Spanish)
Rashid Alí manifesto: http://bit.ly/manifestoRachid
Custody of Rachid: http://bambuser.com/v/2537989.
Enric Juliana article: http://bit.ly/IJpj3q (in Spanish)
A reply to Juliana: http://bit.ly/EnricJuliana (in Spanish)
Italian online petition campaign against the articulo of Enric Juliana: http://bit.ly/HHQaf8 (in Italian)
Article by La Repubblica http://www.repubblica.it/esteri/2012/04/12/news/vacanze_a_barcellona_ti_costano_un_occhio_della_testa_un_italiano_lancia_la_campagna_contro_i_proiettili_di_gomma-33203511/
Police’ Charge: http://www.youtube.com/watch?v=V_bLULITkh4
A protester loses his eye:
http://www.unfotografo.es/2012/huelga-general-barcelona-balas-de-goma#.T4iIeniA8UQ
Blog of movement to stop the use of rubber bullets: http://stopbalesdegoma.org
Link to call for demonstration against cuts on civil rights and liberties: http://www.favb.cat/node/651
Article about demonstration on 14th April against cuts on civil rights and liberties: http://www.lavanguardia.com/vida/20120414/54284478753/centenares-barceloneses-protestan-contra-medidas-antivandalismo-gobierno.html

L’Ostia, a neighbours association of Barceloneta (a Barcelona district next to the old port of the city, one of the poorest)  called for a demo on Saturday April 15th. Hundreds of people protested against the project to transform the Port Vell (Old Port) into a turistic port for luxury boats.
The renovation -encouraged by Barcelona’s Port Authority- is dealt by Marina Port Vell SAU and benefits Marina92, a reparation dock of luxury yachts that is linked to Roman Abramovich, an oil magnate and owner of a ship called Eclipse (price estimated: 850.000 euro). The works already started without any official presentation to the people of Barceloneta, who are asking the authorities for informations.
Unfortunately, it is not the first time that the public administration ignores all the social, territorial, ecological and legal conditions in this area. It already happened with the construction of the Vela hotel. Citizens complain about  the public administration selling itself to private interests without any real care about the meaning of “public”.

The neighbours are asking for: the resignation of the former president of the Barcelona Port Authority and his second man for hiding informations of public interest to the citizens, and a plan of renovations taking into account the reality of the neighbours and their approval.

Actually, building a port for mega-yachts (in the entire world there are around 70!) during this economic crisis period seems like black humour… maybe this recession is not really concerning everyone…

Budget cuts in the public health system are deteriorating and eroding the health services network. Hundreds of CAP (primary health centers), accident and emergency departments, outpatients and operating rooms have been closed. The waiting lists are increasing and  there are forced adjustment plans in hospitals.

The worsening of work conditions and the reduction of health professionals are increasing the welfare pressure. It seems that Spain is being driven to two health care systems: one for the rich, one for the poor. Capitalizing on health care is unfair, as this is a rupture from the concept of social equality, opening the way to discrimination.

Citizens reply to this dramatic situation with popular intiatives aimed at creating an alternative to the gradual deterioration of the public health system. In Catalonia the PARS (Platform of afected by public health system cuts) has been created , a collective embracing anonymous citizens, legal and health professionals, administrative and documentation workers, unemployed and precarius employees, collectives of neighbours and patients. They presented on March 21st a public formal complaint at the District Attorney General Office of Catalunya, demanding a formal investigation of the serious events happening in Catalonia’s health care field. They report that, according to art. 542 of the Penal Code, any government employee that “being aware, prevents a person from the exercise of another civic right recognized by Constitutions and Laws” can be sent to court. Therefore, they claim that the Catalan Government is responsible for preventing Catalans from their rights to  a public health care, and as such they should be judged.

4) SPANISH PLAN OF SALVATION: ARE BUDGET CUTS THE ONLY WAY OUT?

Spain -they say- has to pay its debt, 28,000,000 euro just in interests this year, half of which will be paid by the budgets assigned to pensions and unemployement.

We are in front of the biggest cut in the history of the Spanish democracy. Such a big cut inevitably affects negatively any possibility of Spanish economy reactivation: the GDP is going to fall 1.7% and a further 600,000 jobs are at risk. On one hand they say that the cuts are the only way out from the crisis, on the other hand it is totaly nonunderstandble how this is going to happen. None of their economists or consultants like to explain people how this formula could eventualy work! In their opinion, people just have to be faithful, to believe a strange story of future salvation, despite being  surrounded in everyday life by an increasing poverty, lack of jobs, limitation of freedom, loss of dignity, bad health and educational conditions, and now under the threat of the loss of civil rights.

Moreover, rumours have it that Spain is going to be eventually intervened like Greece, regardless of  how many cuts the government applies. Yet economists who are proposing alternative solutions are not being given the chance to talk in the media but their ideas are spreading anyway through alternative means.