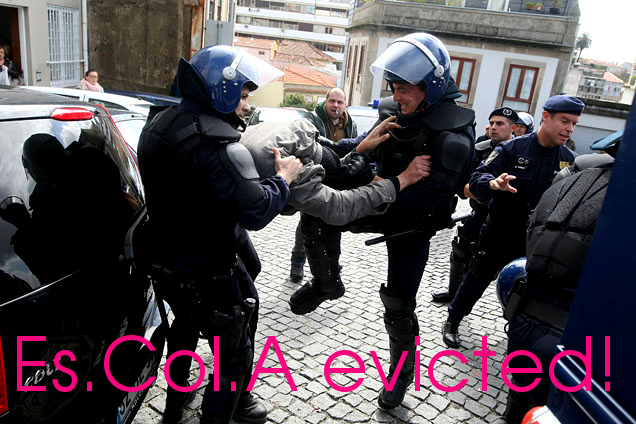 (19/4)  Es.Col.A (Espaço Coletivo Autogestionado, http://escoladafontinha.blogspot.pt/) was evicted. Es.Col.A was an open space, collectively managed in Alto de Fontinha, in the city of Porto in Portugal. It was an old elementary school, left abandoned by the city council for more than five years, occupied by activists since april 2011. In the months following the occupation, the building was recovered, completely renewed and opened again for the local community. It would offer free cultural activities, music, theater and sport, as well as an educational space for children. Activists and the local community were together involved in several projects, and quickly Es.Col.A became a reference point for activists all over Portugal.
All of this is no more. This morning hundreds of police came, facing only few activists and the local residents, and brutally evicted the place. Judge for yourself:
http://www.jn.pt/multimedia/galeria.aspx?content_id=2429565
http://pt.indymedia.org/conteudo/newswire/7208
http://www.dn.pt/galerias/fotos/?content_id=2430298
https://www.facebook.com/media/set/?set=a.10150694868582635.395818.601997634&type=1
http://static.publico.pt/docs/sociedade/escolafontinha/
Peaceful protestors were violently beaten and arrested (we are still collecting documentation). They were accused of ‘resistance’ and will face court on the 2nd of may.
All the material was completely destroyed: books, computers, bikes, the kitchen and even children’s toys! You can see at the end of this video:
http://www.jn.pt/multimedia/video.aspx?content_id=2431045
(even the unions of the fire departments protested for the involvement of fire fighters in this action: http://www.tvi24.iol.pt/sociedade/porto-fontinha-bombeiros-sapadores-tvi24/1342150-4071.html )
The space has become exactly as it was before the occupation: an empty abandoned building, useless for the community, probably left to ruin until some speculator can buy it for a very cheap price from his politician friends.
The whole country is outraged: today there were spontaneous protests in Porto
(https://www.facebook.com/media/set/?set=a.435705029778563.120081.225334420815626&type=1), Lisbon and on the internet where our friends from Anonymous took down the website of the city council of Porto.
Tomorrow there will be other protest and solidarity actions in many cities (https://www.facebook.com/events/344548452271014/). All with a clear message: the school must go back to whom it belongs, the local community of Fontinha.