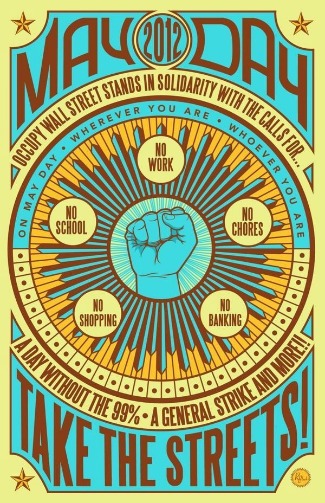 Occupy Wall Street hopes to capture headlines once again next week with the May 1 “General Strike”, long-advertised by the group as an event that will prove to the public and media that OWS is currently experiencing a resurgence. Whether workers, students, or banking customers, OWS is calling on all Americans to stop offering their labor and money to corporations for one day and join their local Occupy chapter for a day of resistance.

The plan initially drew the ireof some labor leaders who quickly declared their members would not participate in the so-called strike.

Under the 1947 Taft-Hartley Act, a general strike in support of other workers is illegal. Furthermore, individual unions must call for a strike, so the participation of workers in a protest does not constitute a general strike.

The official OWS press release about May Day mentions the phrase “general strike” twice: once in the headline, and once in quotation marks in the first paragraph. Perhaps keenly aware of the likelihood that an across the board labor strike is not only unlikely but illegal, the day is now being described by organizers as a nationwide protest with themes of economic non-compliance. (Poster by Nina Montenegro, via Occuprint.)

“We wanted to create a broad space for people in all different circumstances from all sorts of backgrounds to be able to participate,” the OWS press release states. “But we also recognize that for some people skipping work is not feasible so we are encouraging people to participate how they can whether that involves wearing a button at work or leaving early or simply showing up to the march after work.”

Shawn Carrié, an Occupier who has been working on the May Day project since January, remembers the exact moment the direct action working group he was participating in passed a proposal to the General Assembly announcing OWS would stand in solidarity with the call for a general strike. He remembers the event in precise detail because the group was so conscious of its wording.

“There was varying opinion over whether to call for only a general strike, or only a day on economic non-compliance, and we wanted everyone’s views to be represented in the call,” he explains.

“We are calling for ‘A day without the 99 percent’ based off the success of ‘A day without immigrants’,” says OWS spokesperson Diego Ibañez, referring to the 2006 U.S. immigration reform protests. “Early on, Occupy Wall Street realized that the unions couldn’t call for a general strike, we were told, because of legal reasons. However, that’s the beauty of the call. It can be answered in various ways. When we say general strike, we aren’t limiting ourselves to the word’s traditional meaning.”

“The powerful thing about this May Day is that immigrant rights groups, labor unions, the May First Coalition and Occupy Wall Street have been working together and will join forces for a special day that will focus on all our struggles as workers, immigrants, students and mothers,” says Ibañez.

By expanding the definition of the day’s actions, Occupy hopes to attract a broad coalition of support from students, immigrants, and labor. Showing solidarity with OWS no longer strictly means refusing to show up for work. Now, students can walk out of class, younger people can refuse to do chores, citizens can take the day off from giving banks business, and all of these actions will symbolize standing in unity with the Occupiers. (poster via occupywallst.org)

Despite facing a backlash from some union organizers, many unions and pro-worker advocacy groups, including 1199SEIU, Retail Action Project, Domestic Workers United, and New York City Central Labor Council, AFL-CIO, have expressed support for May Day, and their endorsements are listed at maydaysolidarity2012.org.

In total, more than 100 activist groups, labor unions and other progressive organizations have pledged to participate in the rally and march. Rhadames Rivera, vice president of the SEIU Local 1199, told Downtown Express Monday that more than 12,000 union members are signed up to participate, and that number was likely to grow dramatically throughout the week.

“May Day represents the long and brutally repressed history of the workers’ struggle for dignity, equality and fairness,” Chris Longenecker writes at Occupy.com, an independent and non-profit website run by Occupiers working in solidarity with the movement. “The general strike is the most powerful tool we have inherited from the organized labor movement, a tool designed at its inception as a vehicle through which the boldest of revolutionary dreams can come to fruition.”

However, Longenecker recognizes the limitations of calling what might be, for all intents and purposes, a really big, coordinated, nationwide protest, a “general strike.”

“[A] general strike will not come from a few general assemblies and organizations coordinating together. We need everyone’s participation, with various levels of engagement and risk,” he writes.

Since the group’s inception, OWS activists have debated the limitations of acceptable forms of protest and resistance, and the role of violence and property damage in social movements. That unease still exists today with labor leaders expressing concern that “anarchists” might steal the headlines for the day.

Chris Silvera, secretary-treasurer of Teamsters Local 808, said at the meeting that labor leaders “fear” the potential for “anarchist” disruption to May Day plans.

“They feel a level of discomfort knowing that they are dealing with something which they don’t control,” said Silvera in an interview. “You know what I’m saying? And I think for the first time, labor is going to make a step to do something in which it is not in complete control. That’s huge.”

Mostly, OWS wants a big May Day turnout to prove that the movement is far from dead.

Occupy’s day of action in New York City will consist of a pop-up occupation at Bryant Park in the morning, followed by a march to Union Square in the afternoon, and a “coalition program” at Union Square in the evening where a broad coalition of “left groups” and musical acts will hold an event.

Dan Deacon, Das Racist and Tom Morello, among other artists, are scheduled to perform at the afternoon solidarity rally in Union Square. Organizers plan to enlist 1,000 guitar-wielding volunteers to play with Morello during the protest, and are seeking the musicians through an “Occupy Guitarmy” tumblr.

The night will culminate with a permitted march down to Wall Street, and afterwards the coalition march will invite people to join in an “un-permitted OWS march.”

Throughout Tuesday’s day of action, there will be a number of “community pickets” of “corporate targets,” according to Occupy’s press statement. Those targets are typically Bank of America, JPMorgan Chase, Goldman Sachs, and other Wall Street corporations associated with rampant corruption and greed.

Occupiers have also expressed some loose plans to block “one or more” bridges or tunnels going into Manhattan and a “wildcat” march is planned to leave Sara D. Roosevelt Park the afternoon of May 1 before the Union Square rally, Downtown Express reports.

In Oakland, protesters have planned events to support workers at the Golden Gate Bridge, a work stoppage by ILWU Local 10 which effectively shut down the Port of Oakland for the day, a one-day strike by thousands of California Nurses Association Bay Area nurses, and a large March for Dignity and Resistance from Fruitvale to downtown, among other protests.

“Let May Day be a day when we re-conceptualize what a general strike can be,” Longenecker writes. “The eyes of the world will be on us as we reject the state and capitalism and take the models of direct democracy and mutual aid we practices in hundreds of occupied parks across the country to the streets of the cities and towns in which we live.”