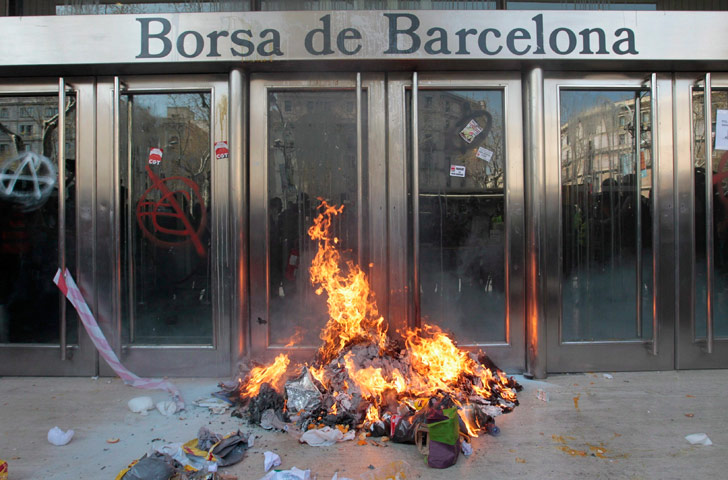 Hello from Barcelona,
this is the  weekly newsletter that will inform you about the activities of 15M  movement in Barcelona, Catalonia and occasionally the main events in  Spain. If you do not wish to receive it anymore, please say so.
1) THE IAIOFLAUTAS STRIKE AGAIN…#enelinteriordeinterior (inside the Home Office)

The elder activists group iaiaoflautas has  been back in action this week: on April 26th they occupied the entrance  hall to the Home Office Department’s for the autonomous government of  Catalonia. The iaioflautas were  condemning the increasing repression in Catalonia, and they asked to  talk to the local Home Office minister, Felip Puig. Finally they were  able to talk to the Home Office’s Secretary General.

In the manifesto that the “iaios” (familiar word for grandparents) read out they condemn:

The  only explanation that they found to this is that the power is scared  and trying to frighten people from protesting for their rights. The iaioflautas would like  to say that they are not scared and they will keep fighting for the  rights that they fought for and gained when young, as now they can’t  bare to see those rights trampled upon.

After  this year of collective thinking, whith several marches towards Madrid,  Paris, Brussels, Rome, Athens… Vallès Occidental, an area near  Barcelona which is really active in the 15M movement, now have a new  opportunity to live this kind of protest and to keep adding experiences.

They  intend to walk along the Vallès Occidental to summon the people from  all the small villages and towns in the area, to mobilize them towards  the Global May 12 demonstration in Barcelona, both by the visibility  this march will achieve as it moves from town to town, and by the daily  assemblies held in the towns through which it passes.

They  also intend to approach people who are not yet 15M activists and report  the reasons why we must unite and stand up against attacks on  fundamental rights we are experiencing globally.

During  these 9 days, the march will prepare a “Book of the People” collecting  the concerns, discomforts, problems, solutions, alternatives, and  complaints each person or entity wishes to contribute, with the idea of  delivering it, once in Barcelona, to the Catalan Parliament to make our  voices heard.

Last  Wednesday, April 26th, Catalonia’s Home Office opened a website of  denunciation, pioneer in Spain. Through this site, citizens can  collaborate with the police by informing of any data that may help with  the identification of the alleged perpetrators of street violence during  the 29M strike.

At the moment of activation, 231 pictures and 3 videos of 68 people where on it: they where named person 1, person 2, person 3 and so on until person 68. Now  some of these photos have been withdrawn for several reasons: One of  them was underaged and his father forced the police to take down his  photographs, and warned that it seemed some more were also underaged and  it is therefore illegal to post their photos there. Four of the exposed  citizens were members of an  independentist group of activists, and as  they have spoken out their names, their pics have been withdrown. They  gave a press conference in Plaça Catalunya, talking of a citizen  platform condemning the mere existence of such a website. Their motto  was Donem la cara (we’re not hiding, approx.)

Obviously,  this website has triggered many reactions -not only in Spain- among  jurists, citizen collectives, and social movements. While Twitter has  nicknamed the website as #laListadePuig (Puig’s  List, as it reminds us of Schindler’s list) and hacktivists are pulling  the site down, journalists have been asking lawyers and judges what  they think of the site. Jurists seriously doubt its legality and  constitutionality as well as the validity in a trial of evidences  collected by blurred pictures and citizens’ tip-offs.

The  main accusation most jurists agree upon is that of breaking the  fundamental rights of self image and privacy, besides the lack of  presumption of innocence.

The  list has been accused of spreading fear, creating a suspicious climate  among people, and – last but not least – being a further repression  brick on the way to fascism that the most alarmist see in the Spanish  horizon.

Yet  we shall not stop in our route to dignity. The four activists from the  independentist movement who were in the list shall be carrying the  opening banner for the independentist block on May 1st demo.

LINKS
The website: http://www20.gencat.cat/docs/mossos_colaboracio/index786d.html
Articles on the website and how it may be illegal:
http://www.elperiodico.com/es/noticias/sociedad/caen-web-delacion-interior-cuatro-sospechosos-ser-identificados-1717981
http://www.publico.es/espana/431022/los-mossos-publican-la-foto-de-un-menor-en-su-web-de-identificacion-de-presuntos-violentos
http://www.publico.es/agencias/efe/430890/la-web-delatora-despierta-recelos-de-los-juristas-sobre-su-legalidad-y-eficacia
Article on the 4 activists who gave a press release:
http://www.setmanaridirecta.info/noticia/quatre-independentistes-que-surten-llista-puig-fan-una-roda-premsa-barcelona (Catalan)

Proupeatge (catalan  for stop toll motorway) is a website where a group of Catalan activists  promote the idea of “Stop paying the motorway toll in the higways of  Catalonia!”

Catalonia is the  only autonomical region where more than half of the high traffic ways  have to be payed for, vs. an average 18% in the rest of Spain: Catalans  say to be tired of paying for the whole country.

In  2004 the highways were supposed to become free of any charge, but the  concession was renewed until the 2021 and Abertis (the international  company managing the highway service) had a net income of 720.000 € in  2011, increasing an 8.8%. The president of this company claims that all  the highways in Spain will become by payment eventually.

On  April 27th a citizen refused to pay it, collapsing the toll-gate of  Manresa (north of Barcelona). Then, more drivers started to protest,  until the Mossos (the autonomical police of Catalonia) gave a free pass  to everyone without any fine. Actually, in the mentioned website you can  find a “#novullpagar (catalan for I do not want to pay) legal guide”  where you can read:
1. The  Catalan Traffic Service and the Mossos do not consider refusing to pay a  toll motorway as an infraction, and they can’t fine you as this action  is not considered in the General Traffic Regulation as an infraction.
2. When you  refuse to pay, the staff of Abertis can just note down the vehicle’s  registration number and let you go. This has no consequences. If they  try to stop you, they are doing it illegaly and you can ask the Mossos  to intervene against them.
3. You have the right to not identify yourself.

The protest is  increasing and it seems that from the last 3 weeks until now 1,500  people have refused to pay. Few days ago politicians of ERC (a left wing  party) joined the protest, inviting everyone to do the same.

The  group made a call for a simultaneous mass action of #novullpagar on May  1st at 12pm, at all the motorway tolls in Catalonia and Valencia.