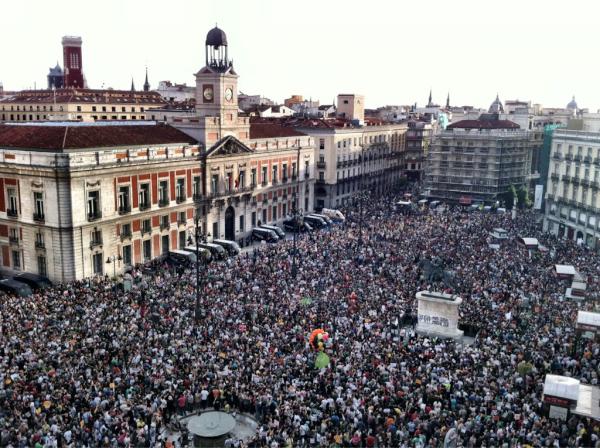 May 12th in Madrid was the second day of global action after October 15th. After another six months of being in the streets, universities, schools, health centers, in the houses and work places, of thinking and rethinking about how to build the world we dream, we needed to meet in the streets again. Many people decided to join this action in over 50 cities around the world (London, Lisbon, Paris, Brussels, Coimbra, Pissa, Helsinki, …). In Madrid, 80 thousand and 120 thousand people  took to the streets once more.

In Madrid we are organized in neighborhood assemblies that began working after the end of the encampment, the demonstrations was composed by four marches heading out to Sol from four directions, that are expressed in a chant: “from north to south, from east to west, the fight goes on, whatever the cost” . The Northern March left Guadalix at 12: 00 and grew continuously as demonstrators joined in from the different villages and neighborhoods in the northern part of the community of Madrid, until it arrived at 19: 00 to the roundabout of San Bernardo.

The West March was born in the village of Majadahonda at 14 pm, picked up the rest of colleagues to reach the Oriente Square at the scheduled time.

The Eastern March, was composed of 2 columns which converged at Cibeles Sq. And finally the Southern March, formed by 3 columns that met at 19: 00 in Atocha.

The 4 Marches arrived at Sol Square at 21: 00, in a few minutes the square was packed and the surrounding streets were overflowing.

During the concentration the Orchestra “Solfónica” offered a great concert.

A giant screen was fixee to display different videos and documentaries.

A giant euro sign on the already mythical statue of the horse of “Puerta del Sol” was exposed to the view of all participants. We must highlight the heterogeneity: grandparents and grandmothers, fathers and mothers with their children, young people, migrants and various activists from around the world, in a relaxed and harmonious atmosphere.

It was after 9pm, Sol was crowded, the Local Government had imposed 10pm as the limit to be in the streets (a sort of phony curfew, as the crowd was so large that it was impossible to evict).  There was an atmosphere of great euphoria, as many thousands remained the warning was simply ignored by everyone, moreover, we knew that “together we can”. At midnight, there was a huge silence in the square and surrounding streets , with everyone rising their hands to the air in a silent scream, broken a short time later by the unanimous chant: “yes we can” and “the people united will never be defeated”.)

After the “Silent Cry” took place poeple waved white flags as a symbol that no flag represents us, and also calling for peace, in solidarity with the countries suffering wars. At 02: 00 an expontaneus General Assembly started, consisting in around 1,500 people in the square broadcasted by the massive follow-up on social networks: Twitter and streaming.

Later in that night, around  04: 30 in the morning, taking advantage of the fatigue of attendees while the GA was finishing, a brutal eviction took place in Sol. Police violence was excessive against peaceful resistance that did not oppose to the attack. The police dragged people by the hair and many were choked by the neck in an attempt of suffocation. All the repression finshed at 05: 00 in the morning with a toll 18 detainees, which were accused of resistance to authority.

A few minutes later through the social networks, activists called for a rally on the 13th of May at 17: 00 in the Puerta del Sol, to demand freedom without charges for the comrades who were arrested.