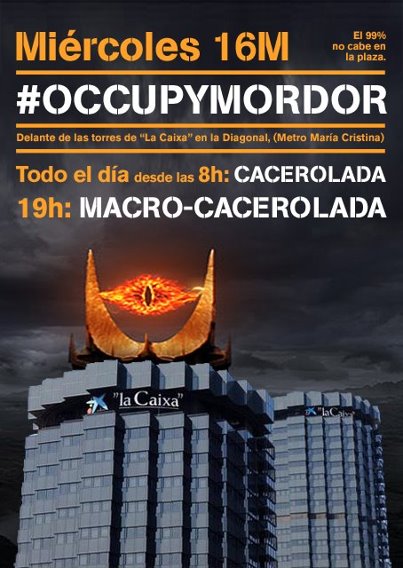 this is the weekly newsletter that will inform you about the activities of 15M movement in Barcelona, Catalonia and occasionally the main events in Spain. If you do not wish to receive it anymore, please say so.

Under the theme “#12m15m. El Poble som la solució” (#12m15m, People are the solution), Barcelona tookt to the streets on May 12th in a demonstration that began in Plaça Catalunya at 6pm, and where over 250,000 people marched through the city peacefully, in a light-hearted mood and without incidents or even a significant police presence.
At 8pm the demo arrived back at Plaça Catalunya chanting “Esta es Nuestra Casa” (this is our home).

At that very moment everything started to revive: The space had already the main stalls and other ones were added freely during the next couple of days: commissions, collectives, associations and so on: a year of 15M’s hard work!
A massive Assembly was held to present the agenda of the coming  days and to explain the methodology to  follow.
Then different groups of 15M could present their projects on which they had been working for a year, and the programme for the following days. At length came the time for the open micro.

The 5 key themes that were processed in the following days had each their own spaces:

The project "Fòrum dels pobles" aimed at turning the square into a space of open and participatory discussion on various topics of interest to citizens. The square was full of 15M activists, supporters and newcomers that came by to hear the talks and take part of the debates.

On the morning of the 13th about two hundred people woke up in the square. Very soon all kinds of people began to arrive asking for the discussion forum or just to chat and discuss the current situation. Six assemblies worked in parallel: four discussions through the “forum dels Pobles” on the causes of the crisis, education, politics and Eurovegas and two talks on health and on feminism.

At noon, after handing out the food prepared by the kitchen committee, there was a batucada and a poetry recital by the group “Bio-slow”.

At 5pm a talk with members of the Audit of Debt and Arcadi Oliveres as a guest began in front of the BBVA Plaza Catalunya. Oliveres defended before a large audience the fair distribution of global wealth. After his speech, different members of Habaron Debt Audit warned of the dangers involved in debt and interest.

At 6pm there was a crowded meeting of Neighbourhoods and Villages, where they put together all the work done throughout the year and discussed about coordination. The next meeting was agreed to be in Sant Vincenç dels Horts, outside Barcelona.

The 13th May General Assembly began at 9pm with the reading of a manifesto supporting the squares evicted the previous night in other cities of Spain. The feminist groups, the PAH (Affected by Mortgage Platform), the Debt Audit, the neighbourhood assemblies, the Labor and basic income as well as the Unemployed group, and others who had been working during the day spoke in the Assembly. As a result, several calls for demos, reunions and actions during May were proposed.

On May 14th, a workday, the square was nonetheless quite full and discussions and meetings were held starting at at 10:30 am. The afternoon talks were much busier, including the small town journalists from Cafè Amb Llet weekly, who have  brought up a well-known Health scandal in Catalonia. The General Assembly at 9pm shared the results and impressions of the day of work.

During the morning of May 15th a group of 15M activists asked to enter at RAC-1 and Catalunya Ràdio Studios, where they were allowed to read their manifesto (link below)

The specific street actions planned for 15M were a great success:

1) “Rescate ciudadano en tu banco mas cercano” (Citizens’ Rescue in your nearest bank) was organized by the PAH (Affected by Mortgage Platform) and Auditoria Ciudadana de la Deuda (Citizen Debt Audit):  People affected by mortgages and housing activists went to 4 banks asking for payment in kind while the auditors – in executive suits – read and explained the real situation  of debt and crisis. The action achieved a success of participation with many supporters who are not usually in these actions, and the affected people obtained from the banks an appointment to discuss their situation.

2) In the #misionPARS, organized by the PARS (Affected by Health Care Cuts Platform), 400 formal complaints were presented to the Prosecutor General’s Office. They were requesting legal investigations into the series of events occurring in the Catalan Health System due to the cuts. Their performance in front of the office was impressive: hundreds of activists layed down as dead people, saying “this is how they want us”, “Don’t look at us, join us”, “They are killing you as well”.

3) To protest against education cuts, a picnic took place in front of the headquarters of PP (Popular Party, the right wing party governing Spain now).

4) The action named #occupyMordor gathered thousands of people in front of the black towers of CaixaBank to perform a popular trial of the banks, who where found guilty for the current situation. Several people affected by the bank’s criminal behaviour testified, supported by their collectives: PAH, “Estafa Banca” (Bank Fraud ), Auditoria del Deute, PARS and so on.

In fact, #OccupyMordor became #acampacaixa, as many people decided to stay there and camp as form of protest. When the General Assambly in Plaça Catalunya finished, more people went off to “Mordor” saying that the actions haven’t finished on May 15th, so the 15M celebratiosn contiued in the bank disctrict and the area was occupied. During the day, instead of blocking the street as in other occasions, activists stayed on the wide pavements with signs of “Honk against the banks” and “Honk agaist Mordor”, and during the green traffic lights they passed among the cars to explain why they are there.

The occupation lasted almost 36 hours before being evicted, and people have returned now to continue protesting. The whole “Mordor” idea has become quite catchy, and people are “supporting the hobbits” and saying they should be careful with the “orcs”, the riot police carefully watching the occupation. Occupy Mordor seems here to stay!

On May 3rd there was expected a huge, violent demo in Barcelona. Or so wanted the Catalan Government, who announced the ECB meeting in Barcelona precisely while its streets where full of activists, riot police and burning containers during the General Strike -March 29th. The fact? Nobody had planned a demo against the ECB. In fact, most activists agreed it was a trap and there was quite a wide consensus on not doing anything on May 3rd, and concentrating on our road to 12M15M.

A few days before the ECB summit, Barcelona was drowned in police. Schregen treaty was revoked for a week. Extra forces came from the rest of Spain, so an estimate of 8,500 police of different forces were taking over the city. Semi-random security checkpoints had started the weekend before the summit, as they were placed in areas near “anticapitalist” centers -squats, self-organised cafes, social centers… It was clear our government wanted a demo, so they had one. On May 2nd. On twitter.

Several well-known twitter accounts from the Barcelona 15M entourage played a surreal game on President Mas and Home Office Secretary Puig, fooling even some journalists who were running around town trying to find the demo. They started tweeting a demo as if it were real, but with the hashtag #ManiFicción (fictional demo). Soon the demo started getting out of hand and riots turned up… giving the image of Barcelona activists that the press was so eagerly looking for. Many other people joined the game until the hashtag #ManiFicción was a joint effort of ridiculising all the police brutality and stereotypes the mass media are using about demos in general and 15M specifically.

The whole thing lasted a few hours, with a sense of fun, joy, exhilaration, and at the same time condemning the control and repression suffered recently in Barcelona. It was curious to tweet and joke about the non-existing demo while you heard the helicopter over your head! #ManiFicción became a way of expressing how ridiculous the whole system is becoming, and how activists are not going to be fooled into demos organized by the Government itself!

Spanish newspapers talk about the excesive police force in Barcelona:

3) WE DO NOT PAY YOUR WAR: FISCAL OBJECTION TO THE MILITARY SPENDING

From May 3rd to the June 30th Spanish citizens have to present the 2011 income tax declaration.
As every year, fiscal objectors against the militar expense have started their campaign to denounce it, more particularly in the economical crisis situation we are in: the government has cut 21% in education, 14% in public health care, 20% in environment, 71% in  development projects …and only 7% to the ministry of Defence.

Hundreds of associations all around the world (in more than 40 countries) celebrated last month the Global Day of Action on Military Spending, on the same day that the SIPRI (Stockholm International Peace Research Institute) published the data on the 2011 global military spending. This has been pratically untouched, whereas every other expense has been cut because of the crisis.

In Spain this campaign brings together several collectives, including the 15M movement.
In Catalonia, he info office for objecting is SIOF (Servei d’Informació de l’Objecció Fiscal a les despeses militars: catalan for Info Service for the Fiscal Objection on the militar spending). They are located in Barcelona, at the head office of “Fundació per la Pau” (Peace Fundation), an ONG founded on 1983 with the objective of promoting a “world of peace”and motivating all cultural and structural changes that will make possible the erradication of violence as a form of relationship among humans.

In the attached practical guide (see links) you can read how to submit your income declaration with fiscal objection: instead of accepting the draft copy sent to you by the tax office, you have to fill it in yourself. There are several boxes in the retention part where you can put a fix amount or a percentage of fiscal objection. Then, you can transfer the amount to the legally registred entity that you like and deliver a letter of fiscal objector togheter with the declaration and the bank-transfer sheet.
Much easier than people can imagine!