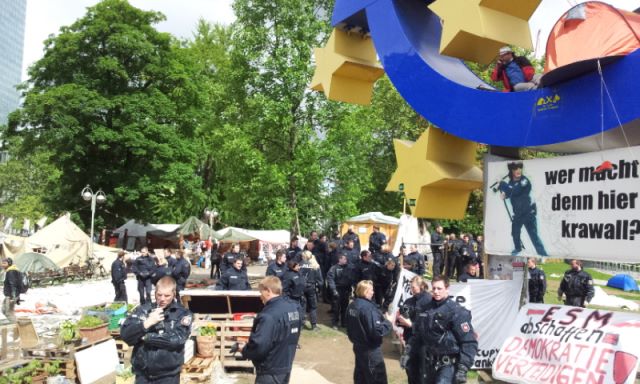 After the local judge in Frankfurt approved most of the bans that local authorities had declared for the protests against the ECB in Frankfurt, the court of appeal in Kassel now gave its verdict. It approved all the bans, and even declared one more protest forbidden: the ‘rave against the Troika’ of Wednesday evening. Apart from the demonstration from Saturday, this was the only event that the previous judge had allowed (under conditions). http://de.indymedia.org/2012/05/330095.shtml

The rave went on happily tonight
(picture: https://twitter.com/#!/henninghenke/status/202822151143821312/photo/1)
Loads of police surrounding the demons trators and demanding banners to be taken down. One of the banners read: “Our Solidarity Against Your Crisis”
First subwaystations have been closed of by the transport company, as anounced

There is still one other demonstration in Thursday that is not prohibited: the demonstration against the repressive measures called for by the Komitee fur Grundrechte und Demokratie (starting at 12:00 at Paulsplatz).

Blockupy calls for a demonstration to start in front of Central Station to join the Grundrechte-demonstration.
http://blockupy-frankfurt.org/de/node/406

The Occupy-camp near the European Central Bank has been evicted in the morning of Wednesday. Some 200 persons ‘resisted peacefully’ and were dragged away. Some riotcops got a nice load of paint over them. After the eviction police started to erect fences around the park and the ECB-building.
Film http://www.youtube.com/watch?v=Lv2s6O3mJVc&feature=youtu.be
pictures http://www.fr-online.de/blockupy-frankfurt,15402798,15421232.html
Pictures of surroundings of ECB today https://picasaweb.google.com/107194122403576087216/May16201203#
Video streams: http://bambuser.com/v/2651370

Blockupy Call & Newsletter urges “everybody to come to Frankfurt”
http://blockupy-frankfurt.org/de/node/402

The car outside of the house of the German head of the EU task force for Greece Horst Reichenbach has been blown up in Potsdam, the action was claimed by ‘friends of Loukanikos’ http://de.indymedia.org/2012/05/330101.shtml