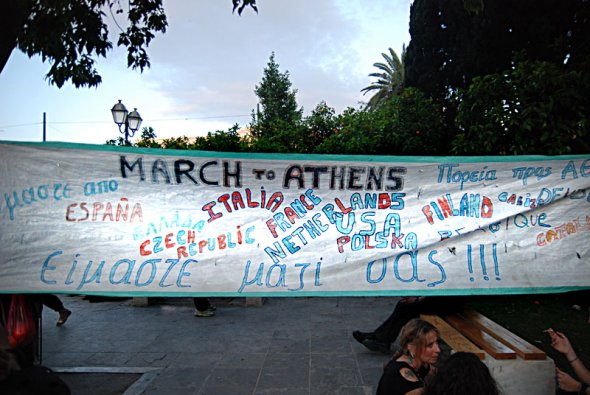 The comfort of the squat is dangerous for the revolutionary spirit. Especially when there is little of it. It’s evening and we’re sitting together in the living room, a dozen marchers. In the small kitchen, Mami is cooking for her hijos de puta. The cloud of spicy smoke is so thick that it’s hard to read the writings on the walls.

It’s the first time that our clan has a roof, sofas, a kitchen, a shower to call our own. At least for the moment. After half a year of camping, people enjoy it. And no-one will deny that we didn’t deserve it.

But on the other hand, it’s 15M’s eve. Tomorrow we celebrate the first anniversary of our movement, and right now there is a handful of our people holding the square of Syntagma.

I have been there the first two nights, and I’ll be damned if I don’t join them now. So I rise up from the soft pillows of the sofa, I cut my way through the cloud of smoke, and I go. “Later, people. I’m going to see what’s cooking on Syntagma.”

It’s a twenty minute walk. When I arrive, I see we occupied the center of the square. People with sleeping backs and covers are gathered in a circle. I squeeze in, I lie down and I listen to humming of the conversation as I start to doze off.

Just when I’m about to get some sleep, police arrive. Two dozen officers in riot gear. Because of the blankets, this is considered camping in a public space, and we have to move.

We are not the only ones. All over Athens, thousands of homeless people are ‘camping’ as well. They are more every day.

We take away blankets and sleeping bags. We leave the cardboard. We lock arms and legs together and we humm. It takes as while, but in the end police retreat. We take our stuff again, and we stay in Syntagma for the third night in a row.

The third night in Syntagma

After the retreat of police

Occupy the tree
In the morning, at six, it’s police again for the wake up call. We have to move, seriously this time. The reason is that the sprayers come to clean the square.
We stay put. Riot police is deployed on two sides, and then they send in the cleaning car to put us pressure.

In a white cloud, the water vapour bounces of the tiles of Syntagma. The machine moves slowly towards the group. People start to evacuate, to try and safe their stuff. It could have ended right there. Indignados simply washed away from Syntagma as yesterday’s dirt.

But it didn’t end that way. The real heroine of the day was comrade Sabina from Belgium. She laid herself down in the streaming water in front of the spraying vehicle. And the firm look in her eyes said she wasn’t going to move.

It was the key moment. Max joins in and others follow. Comrade Cansino takes a bath straight in front of the vehicle and comrade Aristocrates plays the guitar. It’s a fabulous scene. And it’s true what they say. Our movement has an innate taste for drama and beauty.

Then police proceeds to evacuate, hesitatingly. They don’t really know how to handle us. If we were a band of hard core anarchists they would have just beaten us off the square and into the bus in ten minutes time. But these crazy foreign pacifists are different. They have to be handled with gloves. Plastic gloves to be exact.

The first people get dragged away. But just before they get to the police car, others come running in and piling up. Police have to start all over again. First, they surround the pile. Sabina got left out, but today she has revolutionary spirit for ten. She charges the police like a wild horse, demanding access to the circle.

In the end the arrest took more than two hours. About a dozen people resisted, passionately. I didn’t add to their numbers. I preferred to document the scene and spread the news.

Today is the first anniversary of our movement. Here in Athens the marchers and locals on Syntagma marked it appropriately with a determined act of resistance. Not so much against police, but better, against the water.