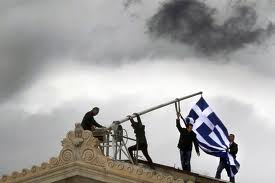 It’s been a revealing period for all of us. We never realized quite how big is the turbulence we got into. Papandreou managed to corner us in the end of 2009 with the fear of default and a well prepared propaganda by the media and the EU officials. The Left was caught unprepared and the society almost consented while in shock. Troika was established as the only reliable solution and most people hoped that a way out passes through these painful first austerity measures. Among other budget cuts, the 1st memorandum was signed in April 2010. People thought they would be the only one, they hoped that even though its not their fault, the storm would finish after 2-3 years. They saw no other political alternative to follow at that time. The working class through the unions tried to answer back with the  traditional way of the general strikes. But the participation remained small; the bureaucratic and corrupted union movement was paying its tolls.

As time went by, the messages that we were all receiving were getting worse. The first big sacrifices worth nothing they said, the crisis is ‘’bigger than we thought’’, troika needs more cuts. So the government and the media started to prepare for more cuts. The blackmail was ‘’this way or the highway’’. Either you follow exactly what troika proposes or you default and get out of Europe with the worst to follow. The terror in disguised… Nevertheless the people’s faith into the fact that this is the only possible solution started slowly to crack. A first sign was the massive demonstration in the 5th of May 2010.More would follow but what they provided was little more than an outlet for people’s rage and indignation, as they lacked both political leadership and a political plan to overthrow the government. In the meanwhile the Left even though divided, started to recover and whispering that another way is possible. That  Greece is just the first in the row of an experiment that takes place designed by banks, neoliberal politicians and high EU officials. That this is a European crisis and not Greek and that more countries would follow. Information and discussions started to spread through Internet regarding how economy is functioning, what exactly debt consists, what is the role of the banks in the crisis, how deep was the corruption in the two major parties all these past 40 years, how many times similar crisis have happened through out history etc. People had to re-discover politics.

In May 2011 and while the new mid-term fiscal plan of austerity measures was under its way, we entered in a new phase. The movement of the Greek  indignados was born in Syntagma square. It was now clear that the traditional modes of struggle were not enough and would no longer work because the social consensus had been systematically destroyed. It was a new reaction and an expression of the anger and the indignation of people which signified a turning point from the economic struggle to the political one as well. The indignados’ movement was directly related to the country’s deepening economic crisis and it swept through Greece for almost three months. Without the umbrella of any political party, or trade union, the movement managed to attract far more numbers than could have been expected, united under three main demands: (1) refusing the debt which the people had not run up; (2) overthrowing the government which accepted the conditions of the ECB-IMF-EU loans in the so-called “Memorandum” (harsh austerity, lowering wages and other ‘reforms’); and (3) real democracy right now. This period was also marked by two very important dates: the general strike of 15 June and the 48-hour general strike of 28 – 29 June. All of them were handled by police with the most brutal way that society had seen for decades.

In autumn the movement started to transform once again going from central to local and inspired all kinds of resistance. The impact of the self-determination that indignados left, could be tracked in many popular assemblies in the squares and neighborhoods of Athens and other Greek cities. Using a broader political framework in order to include and secure the participation of larger sections of society, these popular assemblies extend self-organisation into people’s lives by creating solidarity networks, by occupying public buildings, by creating community grocery stores, social clinics, by exchanging services and products without using money, and more.

Large numbers of working people started refusing to pay a debt that they had not run up. Under the slogan “we don’t pay”, this movement has refused to pay motorway tolls, bus fares, electricity bills that include a new property tax and bank debts. Even more elaborate and more radical forms of struggle appeared, with workers taking on self-management. The striking workers at the Hellenic Steel factory in Athens (which started is now entering its seventh month), at Eleftherotypia, one of the most prestigious Greek daily newspapers, at the ALTER TV channel lead the way. At the local general hospital in Kilkis, in northern Greece, health workers have occupied the hospital and taken control to defend the public’s right to free healthcare.

Around the country people threw yogurt at the government’s MPs as a sign of protest. In abroad the new young Greek immigrants stood up wherever government politician appeared and answered back trying to give their side of the story.

All the above while crisis deepened and the austerity measures condemned Greek society to deplorable living conditions.
The huge demonstration on the 19th of October with more than 500.000 each sent once more a huge message to government and troika that they once again failed to take into account. The demonstration was cruelly restrained with extreme use of teargas and police brutality. The media, as always supporting the government, attacked the social ideas and practices of resistance while protecting the monopoly of state violence and legitimacy. The pictures of burning buildings and banks travelled around the world.

But behind the spectacle of the burning and the fires, there was a deeper process going on in society, a patient construction of a different way of doing things, the creation of social cohesion and mutual support. This process can eventually lead us to an alternative path, it can lead to us creating institutions of democratic counter-power in every neighborhood. That Sunday was in fact the point at which the Greek people lost their fear.

Ten days later, on 28 October spontaneous, country-wide, popular demonstrations during the military parades brought the political struggle against the regime to a head, ending the legitimacy of Papandreou’s government and leading to its collapse. The new coalition of the two major parties that took Papandreou’s place had no different intentions. As a matter of fact the things got even worse as the new prime minister was never elected, a far-right wing party entered the government and they all signed a 2nd more cruel Memorandum.

No need to mention all the misery, poverty and despair(that pushed many people to commit suicide) that these memorandums brought in the Greek society the last two years. Its enough to mention the 50% loss of income and the 45%% of unemployment in young people. The people of the countries that are getting closer to a crisis similar to Greece understand this. They expressed their solidarity on the 18th of February with a European call of Action. The movement in Greece is slowly joining voices with other movements in Portugal, Spain, Italy, France and Ireland.

The latest developments in Greece have paused for the moment the dominance of troika. The elections of May the 6th (which the government refused for so many months) finally brought a clear result of rejecting any sort of memorandums and overthrowing the two ‘’big’’ parties that ruled the country for the last 40 years. In addition the Left has gained remarkable support and for the time being everything is possible (if other countries will follow).

One thing is for sure. That they can not control the people anymore, that this sparkle might lead to a fire… It was about time!